Now You Can Legally Mine an Asteroid for Gold 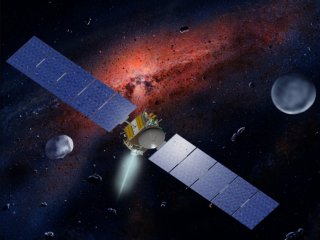 It is the beginning of a new space age. On Nov. 25, President Barack Obama signed into law a bill passed by a Republican congress that provides legal clarity and economic incentives for the growing American private space flight industry.

The law, which was moved through Congress by Rep. Kevin McCarthy (R-Calif.) and Sen. Ted Cruz (R-Texas), allows private American companies to extract, use and sell asteroid and space resources.

In pertinent part, the bill reads:

To the popular imagination, this might not seem to be a great prize—after all, asteroids are just floating rocks. Recent studies of near Earth asteroids, however, indicate that the precious metals, rare minerals, and water that asteroids contain are worth between $100 billion and $1 trillion. To put this in context, in the best-case scenario, a $1-trillion asteroid is one seventeenth of the gross domestic output of the United States of America ($17.42 trillion)—and there are a lot of asteroids.

For many years, this treasure trove has been out of reach, but not merely for technological reasons. Current international agreements seek to bind space resource exploitation to what is termed a “global commons regime,” whereby private commercial companies would be forced to pay a significant portion of their profits to developing nations. The problem with this approach is obvious to anyone with a cursory knowledge of economics—it seriously disincentivizes commercial space research and exploration and exploitation of space resources.

The global commons approach to the exploitation of extra-national resources, also termed the doctrine of the “Common Heritage of Mankind,” is most notably enshrined in the United Nations Deep Sea and Outer Space Treaties. (The United States is not a party to either of these treaties.) This doctrine holds that the resources outside the limits of national sovereignty are held in common by all humans on Earth, regardless of their technological capabilities or investment in their exploitation.

The belief held by proponents is that it would be unfair for one nation or people to profit from resources that other nations cannot reach, and that an equitable international order requires that the exploited resources be distributed to all nations, and particularly developing nations.

Luckily, the U.S. Congress does not subscribe to the radical vision enshrined in the common heritage of mankind, and it passed the U.S. Commercial Space Launch Competitiveness Act of 2015 (H.R. 2262).

This new law gives American companies and investors alike needed assurances that their investments in groundbreaking new space technologies will be rewarded. One such company, Planetary Resources (the first firm to use Kickstarter to crowd-fund a public use space telescope called ARKYD), has speculated that it will be able to begin mining near Earth asteroids in 2025.

In this era of political gridlock, it is good to see the legislative process work to protect American companies and expand economic opportunities.

Alden Abbott is deputy director of the Edwin Meese III Center for Legal and Judicial Studies and the John, Barbara, and Victoria Rumpel Senior Legal Fellow. Follow him on Twitter @AldenAbbott1. This article originally appeared on the Daily Signal.