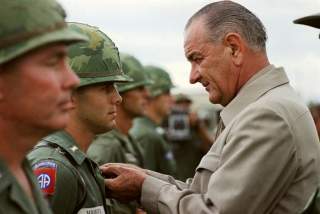 The first week of August marks not only the centenary of the guns of August 1914, but also the fiftieth anniversary of the Gulf of Tonkin Resolution, which was as near as the United States ever came to a declaration of war in Vietnam. It’s worth reflecting on why the events of August 1964 still remain the subject of intense controversy.

The root of the matter was the U.S. constitution, which designates the president as commander-in-chief but requires congressional approval for the country to wage war. Conflict between the executive and legislative branches over war powers has been a feature of administrations from Woodrow Wilson to Barack Obama.

On August 4, 1964, President Lyndon Johnson announced that North Vietnamese torpedo boats had made two unprovoked attacks, on August 2nd and 4th, on the USS Maddox patrolling in international waters around the Gulf of Tonkin. The Administration immediately sought a congressional resolution which, in sweeping terms, gave the president the right to commit American forces to the defense of any Southeast Asian nation threatened by communist aggression or subversion. Based on the reports of the two attacks, Congress passed the resolution on  August 7th  by overwhelming majorities, 88–2 in the Senate and 416–0 in the House of Representatives.

The political context was all-important. Johnson, who’d unexpectedly become president following the assassination of President John Kennedy in November 1963, would face election in his own right in November 1964. He wanted a substantial majority that would enable him to introduce a program of civil rights and other domestic reforms. The brewing conflict in Vietnam was still a second-order issue in the United States. Johnson wanted to keep it there, while showing that he would respond with appropriate but limited force to any unprovoked challenge from the communists. He could thus present himself as the candidate most likely to keep American boys out of a land war in Asia, especially after the Republicans rejected the moderate Nelson Rockefeller and chose the hawkish Barry Goldwater as their candidate.

The Tonkin Gulf resolution suited Johnson’s tactics admirably: he won the election in a landslide. But from 1965 onwards, as the war escalated, the death toll mounted and a “credibility gap” emerged over Johnson’s handling of the war, his critics thought it had all been too convenient. Opponents challenged the resolution’s validity. Leading Democrats who emerged as prominent critics of the war, such as Senator William Fulbright, believed they had been grossly misled about the facts of the incident and Johnson’s intentions.

They raised three major charges. First, it was claimed that at least one, perhaps both, of the alleged attacks hadn’t actually taken place. Second, the administration was alleged to have deliberately provoked an attack, in order to gain congressional authority for the subsequent escalation of the commitment, which was already being planned in secret. And third, Johnson had allegedly misled Congress over his intentions and the way in which he would use the resolution.

Even after fifty years, much remains disputed, but the following seem to be the most credible responses to those charges.

First, the attack of August 2nd did take place; the alleged second attack almost certainly did not.

Second, the episode was as much a blunder as conspiracy. Two separate programs were under way in Vietnam, overseen by different agencies in Washington. Operation 34A involved provocative, but ineffectual, missions by CIA-backed South Vietnamese agents into North Vietnam, while the U.S. Navy conducted electronic eavesdropping missions called Operation DeSoto. The North Vietnamese understandably thought the Maddox was involved in a 34A attack. It wasn’t, but the extent of co-ordination between its DeSoto mission and the 34A attack remains unclear. Some hawks in the Johnson Administration had prepared a draft congressional resolution, but the administration’s intention was to introduce it later in the year, possibly after the election. Instead, in a hasty and opportunistic reaction to the alleged attacks, it was brought before Congress while the reports of the alleged attacks were extremely confused and contradictory.

Third, and most important, Johnson clearly gave the impression that his intentions were strictly limited, and that he would consult Congress further before any major escalation of the war. When Johnson’s Defense Secretary Robert McNamara wrote in his 1995 book In Retrospect that he and his colleagues had been “wrong, terribly wrong” on Vietnam, he asserted that Johnson’s error wasn’t deliberate deception in August 1964, but gross misuse of the resolution’s authority in subsequent years. While an important insight, that doesn’t fully excuse Johnson’s behavior in an episode which, half a century later, stands as a reminder of the enormous impact on world affairs of hasty actions, unduly influenced by domestic party politics, bureaucratic confusion and interagency rivalries.

Peter Edwards is an adjunct professor at the Alfred Deakin Research Institute of Deakin University. He is the official historian and general editor of the nine-volume Official History of Australia’s Involvement in Southeast Asian Conflicts 1948–1975.  This article first appeared in ASPI's The Strategist here.