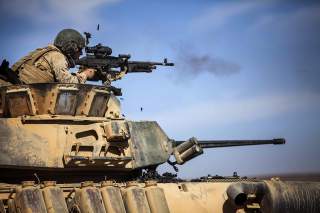 Global defense spending in 2018 is expected to reach the highest levels recorded since the end of the Cold War.

That’s according to Jane’s Defense Budget, the annual forecast produced by IHS Jane’s. In a press release announcing the report’s publication, IHS Jane’s estimated that worldwide defense spending in 2018 will be $1.67 trillion, slightly exceeding the previous post–Cold War record of $1.63 trillion, set in 2010. The $1.67 trillion would be a 3.3 percent increase over 2017 levels, the highest year-on-year growth in over a decade.

In revealing IHS Jane’s forecasts, Fenella McGerty, a principal analyst at the company, said: “The increase in defense spending reflects improving economic conditions around the world, coupled with a response to continuing instability in a number of key regions.” That a growing global economy is the primary force behind increased military spending is substantiated by McGerty’s observation that “defense spending remains lower in relation to GDP than at any time in the last 10 years.” In fact, over the last decade global defense spending has dipped to an average of 2.2 percent of GDP, down from 2.7 percent.

In contrast to many recent years, when the Asia-Pacific and Middle East saw the largest increase in military spending, IHS Jane’s believes the United States and Europe will power the growth in global military spending next year. In Washington, the company expects the new Trump administration to grow the U.S. military budget by 4.8 percent in 2018. President Donald Trump recently signed a defense-policy bill—the 2018 National Defense Authorization Act—calling for $700 billion in military spending. However, while the NDAA outlines defense policy, actual funding comes from appropriations legislation. For Congress to fully fund the priorities of the NDAA, it would have to remove the spending limits imposed by the 2011 Budget Control Act, which caps the Department of Defense’s base budget at $549 billion.

More surprising than U.S. defense spending increasing under the Trump administration is that IHS Jane’s expects significant increases in military budgets in Europe. The report forecasts that western European defense spending will increase by 1.6 percent in 2018, with eight NATO countries (not including the United States) meeting the alliance guidelines calling for members to spend 2 percent of their GDPs on the military. Those eight countries are Greece, Estonia, Turkey, Latvia, England, Lithuania, Poland and Romania.

As this list implies, military spending is expected to grow especially fast on the other half of the European continent. In fact, the report forecasts that eastern Europe will have the fastest rate of growth in the world, with many countries expected to increase defense spending to increase by 2 percent or more in 2018. The Baltic states will lead the way, according to IHS Jane’s. Indeed, next year the three Baltic states are expected to have doubled defense spending relative to their 2014 levels. Not surprisingly, fear of Russia is the primary driver of this growing military spending. As McGerty, the IHS Jane’s analyst, puts it: “Growth has taken off in Eastern Europe since Russia’s intervention in Ukraine in 2014 with the majority of the new defence funding being put towards military modernisation. . . . Armored vehicle procurement is on the increase—in fact, Europe is emerging as the leading spender globally in the military ground vehicle market.”

Interestingly, while fear of Russia is driving up defense spending in eastern Europe, Moscow’s own military budgets have been on the decline. IHS Jane’s notes that Russian defense spending continued to decrease in 2017, and is now 10 percent lower than in 2015. Furthermore, the company expects another 5 percent decrease in 2018. While it believes that Russia’s military modernization will continue, its pace will be significantly slower.

Although Asia and the Middle East are no longer driving defense spending growth, they are once again contributing to it. According to IHS Jane’s, military budgets actually declined in the Middle East and North Africa (MENA) region in 2016, before returning to growth in 2017. This was primarily attributable to Saudi Arabia—which has quickly risen up the ranks of top military spenders over the last decade—once again devoting more money to its military. Of course, Riyadh is currently embroiled in a protracted war in Yemen while also trying to combat Iranian influence across the region. Thus, it makes sense that Saudi military budgets are increasing. While IHS Jane’s expects military spending in MENA to continue to grow in 2018, low oil prices will ultimately restrain growth.

Finally, after growth in Asian military spending slowed to levels not seen in years in 2017, IHS Jane’s predicts it will see an uptick in 2018. This forecast is based on both improving economic conditions as well as emerging strategic threats like China’s rise and the North Korean nuclear issue. As Craig Caffrey, an IHS Jane’s analyst, explained: “Economic growth is still the main factor behind rising spending in Asia-Pacific, but we’re starting to see strategic factors play a more prominent role. In recent years Chinese actions in the East and South China Sea, the North Korean ballistic missile threat and insurgencies throughout Southeast Asia have all caused additional funding to be diverted towards defense.” Caffrey also said that IHS Jane’s still expects the “Asia-Pacific to be behind the driving force behind long term growth in global defense spending.”

Image: A U.S. Marine shoots at targets with an M240B machine gun from a light armored vehicle. Flickr/U.S. Marines