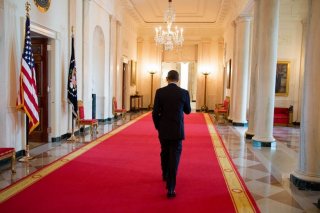 Congress left town this August for an extended recess without passing a budget or any required spending bills, and spending has largely been ignored as a major issue in the presidential election. But just because the politicians and media are distracted doesn’t mean the nation’s most critical problems are going away.

Case in point: The Congressional Budget Office just released its updated budget projections, and the unrelenting deluge of spending, debt, and deficits continues to grow larger by the year.

Deficits are back on the rise in 2016, no matter how much the president and others may claim that they’re no longer a problem. And they’re growing faster than expected: The CBO had to increase its deficit projection by $50 billion for this year, up from $540 billion in March to $590 billion in the updated data.

These deficits are projected to feed the rapid expansion in federal debt, which is expected to climb to $28 trillion within 10 years. That’s up from $19 trillion today and almost triple the level of debt held when President Barack Obama took office in 2009. The public debt (the portion of debt traded in credit markets) will continue its worrisome climb, hitting 86 percent of gross domestic product within a decade.

The CBO takes care to note, however, that overall debt projections are slightly lower than the March projections.

This is not because spending has slowed, but only because the CBO anticipates that the Federal Reserve’s actions will cause interest rates to rise more slowly than it originally projected, thus reducing projected interest payments. But interest rates are not controlled by the Fed and are subject to market forces, meaning an unexpected increase could cause interest costs to jump, making the budget picture look worse than portrayed by the CBO.

Though deficits and debt are troubling, they are symptoms of the real problem: unsustainable spending. The CBO’s update shows that annual federal spending will top $6.2 trillion by 2026, up from $3.9 trillion this year. That increase would put spending near 50-year highs as a share of the economy, reaching 23.1 percent of GDP by 2026. At that level, government spending will account for nearly a quarter of economic activity, crowding out the productive sector of the economy.

Most troubling, however, is that the vast majority of spending increases are attributable to just a handful of programs. A mere 2 percent of spending accounts are driving long-term unsustainability in the budget. The fastest growing are mandatory programs and net interest, which essentially grow on autopilot every year.

The largest culprits are Social Security, major health care programs (Medicare, Medicaid, and Obamacare), and net interest, which account for a stunning 82 percent of the growth in spending over the next 10 years. Interest costs alone are expected to nearly triple over the 10 years, even as the CBO assumes historically low interest rates.

Accordingly, these mandatory programs continue to enlarge their share of the total federal budget, which stands at 69 percent today and will reach 77 percent by 2026.

This means that constitutional prerogatives like defense will be crowded out in favor of paying out benefits. Indeed, defense spending will fall from 15 percent of the federal budget today to 12 percent in just 10 years. This suggests a dire need to restructure the budget.

The coming increases in spending and debt should give Americans of every stripe pause. Comprehensive spending reform is the only way to reverse these trends, and if Congress and the presidential candidates are serious about solving the nation’s problems, spending restraint should be reinstated as a defining issue of the 2016 election.