Report: Gun Ownership, Concealed-Carry Permits Up Among Women and Minorities 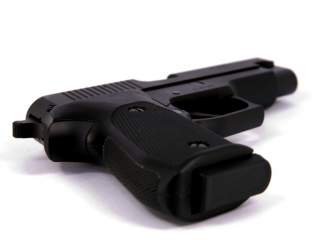 Antonia Okafor, a Dallas resident, says she believes a gun can be the great equalizer for women to defend themselves—one reason she is now the southwest regional director for a group called Students for Concealed Carry.

State laws allowing residents to carry concealed weapons have been enacted in all 50 states, with varying degrees of regulation—most recently on college campuses.

“We see ourselves as doing this as a means of empowerment,” Okafor, 26, told The Daily Signal in a phone interview. “Real feminism is about empowerment and taking our safety into our own hands.”

But Okafor—a graduate of the University of Texas at Dallas, where she became involved in the movement—said her mother is opposed to guns.

In an April poll by ABC News of issues millennial women are most concerned about, gun rights scored even with equal pay and abortion, each getting 11 percent.

A study by the Crime Prevention Research Center earlier this month found concealed-carry permits have boomed nationally, but particularly among women and minorities. “In eight states where we have data by gender, since 2012 the number of permits has increased by 161 percent for women and by 85 percent for men,” the report says.

From 2007 through 2015, concealed-carry permits issued by state and local governments increased about 75 percent faster among nonwhites than whites, according to the report.

Okafor noted that those living in the inner city “are the most likely to benefit” from self-defense.

“A lot of minority homes didn’t have father figures growing up,” Okafor told The Daily Signal. “The right to bear arms is a way to protect our community. Every weekend people are dying in cities riddled with gun control.”

Okafor said increasing gun ownership could mark a political shift among both women and minorities away from pro-gun control Democrats to pro-gun rights Republicans in the longer term.

However, JaQuan Taylor, a senior at Georgia Tech, is a Democrat and president of the college group that advocates allowing students and faculty to carry concealed firearms while on campus. Taylor, who is black, said he doesn’t plan on switching parties, but he is more open now.

“It’s more challenging for me to pick a politician that wants to take away guns or prohibit them in anyway,” Taylor, 22, told The Daily Signal in a phone interview. “I vote for the person more than the party, but I usually vote Democrat because they are pro-education. Since I’ve gotten a gun, I’ve begun to look at Republicans.”

Taylor said he joined a marksmanship club at Georgia Tech and then “became comfortable with getting a gun to protect myself.”

He said he believes as more African-Americans learn about gun laws, more are buying for self-defense.

He doesn’t see the gun issue as a left-right matter, but more of an issue of freedom, Taylor said.

“It seems like with the push for gay marriage, there is a push for freedom in all directions. That’s a good thing,” he said.

The data on women and minorities should come as no surprise, said Crime Prevention Research Center President John Lott, a noted economist and author of the recent book, “The War on Guns.”

“Women benefit more from having a gun than a man because of the large strength differential between a male-to-woman attacker compared to [a] male-to-male attacker,” Lott, the author of the August study, told The Daily Signal.

Everytown for Gun Safety, a gun control group founded by former New York Mayor Michael Bloomberg, questions the research but said any increase in recent ownership is driven by fear.

“The rate of American gun ownership has been in serious decline over the last 40 years, so it’s not surprising that gun manufacturers are desperately seeking to tap into new markets and that they’re using the politics of fear to drive new sales,” Everytown for Gun Safety spokesman Andrei Berman told The Daily Signal in an email.

Lynne Roberts, the Massachusetts state coordinator for the pro-gun Second Amendment Sisters, said classes at a Braintree, Massachusetts, shooting range went from about five women per month a decade ago to 35 in the past year.

“We have to tell them to call before so we’ll have enough instructors,” Roberts told The Daily Signal. “Now we have to limit it to 26, and it always fills.”

She added that in recent years, an increasingly diverse group of women has sought to learn about guns for the first time. They include single mothers and married women, from 22 to 82, in occupations such as nurses, small-business owners, social workers, accountants, and lawyers. They travel from Rhode Island, Connecticut, New Hampshire, and Maine, as well as other parts of Massachusetts.

“Women are voting typically on the Democratic side because over the last two or three generations self-defense and firearms were demonized,” she said. “Women were told they can’t take care of themselves. That’s changing.”

“Owning a gun and supporting sensible laws that keep guns out of the hands of dangerous people are not mutually exclusive,” Kelly told The Daily Signal in an email, adding:

The so-called Brady bill of 1993 required gun dealers to run all purchasers through a national system for instant criminal background checks. In 2013, President Barack Obama pushed for legislation to require sales at gun shows to go through the same checks, but the measure died in the Senate even while it was controlled by Democrats.

“Americans have seen the government can’t always protect them—from the terrorist attack in San Bernardino to the shooting in Orlando,” Mortensen told The Daily Signal.

Mortensen added the NRA is the “oldest civil rights group” in the United States.

“We are proud to defend the right to self-defense of everyone regardless of race, religion, or sexual orientation,” Mortensen said.

Larry Pratt, president of Gun Owners of America, said he believes the increase in gun ownership and concealed carry could represent a political realignment.

Pratt recalled a friend, a college professor who was a liberal Democrat and an atheist in favor of gun control. Then, after two of the professor’s friends were robbed and murdered, he got a gun. The professor gradually became more conservative on other issues and became a Christian, Pratt said.

“Owning a gun marked the break with the tenets of liberal orthodoxy—that government can take care of me,” Pratt told The Daily Signal. “That opened the door to a broader realignment.”

This article has been modified to correct the name of Students for Concealed Carry.