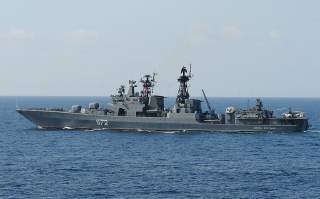 The Russian Navy will design the new Lider-class destroyer with nuclear propulsion, but analysts and defense industry sources are skeptical that the new warship will ever be built.

“The project will be developed by the Severnoye design bureau. The Russian Navy will undoubtedly have large surface ships with a nuclear propulsion unit. The Lider undoubtedly won’t be the sole one in the series," Navy deputy commander-in-chief for armaments Vice-Admiral Viktor Bursuk told reporters at the International Maritime Defense Show (IMDS-2017) on Wednesday, June 28, according to the Moscow-based TASS News Agency.

The massive 15,000-ton warship is being designed to replace many of Russia’s existing Soviet-era surface warships including the Udaloy I (Project 1155 Fregat), Udaloy II (Project 1155.1 Fregat II) and the Sovremennyy-class (Project 956 Sarych) destroyers. The vessel might also partially replace the Kirov-class (Project 1144 Orlan) nuclear-power battlecruisers in Russian Navy service.

However, analysts both in the United States and in Russia—as well as defense industry officials—have doubts that the Lider-class will ever actually be built.

The Russian Navy does not really have a genuine need for the vessels and the ships are expected to be extremely expensive.

“So from the words of the admiral, it follows that the project is not yet finalized, and these are only ‘wishes’,” one Russian defense industry official told me.

“My opinion is that it will be another ‘white elephant’ in addition to the Project 1144 ships.”

Meanwhile, analysts in the United States are also skeptical.

“The discussion on the Leader-class is largely an intellectual exercise since there is no plan to build it in the GPV 2018-2025, or perhaps ever,” Michael Kofman, a research scientist specializing in Russian military affairs at the Center for Naval Analyses told me. “Thus, on paper it can have all sorts of features, and they will be announced often, yet no Leader-class destroyer is built.”

Meanwhile, the Russian Navy is also planning on building an aircraft carrier to replace the Kuznetsov. The ship’s design would be finalized in 2025 and then be delivered in 2030.

“Yes, the Navy will build an aircraft carrier, for sure," Bursuk said.

"The mockup demonstrated by the Krylov State Research Center is just a mockup. There are many of them. Different bureaus are hammering out an image of this ship."

The Russian defense industry source was skeptical of that claim too as were American analysts.