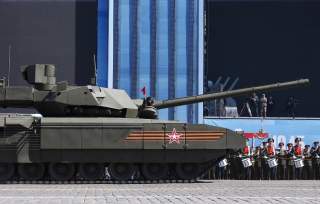 A new report in the German newspaper Bild, citing anonymous Western intelligence sources, claims that Russia’s Zapad-2017 exercise in September was a dress rehearsal for a massive invasion of NATO territory.

According to the story, two “Western intelligence sources” posit that the underlying scenario was to capture of the Baltic states in a short sharp campaign lasting just a few days. That alleged Russian blitzkrieg would be accompanied by a "shock campaign" against a host of NATO states, including Germany, the Netherlands, Poland, Norway and the neutral states of Sweden and Finland. Essentially, the nameless Western intelligence analysts suggested that Russian forces would seize a forty-kilometer-long land bridge in between Poland and Lithuania while Moscow bombers and naval forces would launch missile strike against other Western allies.

The Bild report also claims that more than one hundred thousand Russian forces took part in the Zapad-2017 exercise. That’s a far higher than numbers cited in previous reports and well above the ceiling imposed by the Vienna Document, which stipulates that NATO observers should be present at any exercise that involves more than thirteen thousand troops.

The Bild report is an outlier—most likely because the anonymous sources spoke to the paper specifically to inflate the threat perception in Europe. Indeed, most analysts believe that the exercise was considerably smaller than the often-outlandish assertions that were made in the days immediately preceding the exercises.

“Zapad 2017 was decidedly much smaller than expected, and loud pronouncements in media outlets anticipating something on the order of 100,000 troops went unfulfilled,” Mike Kofman, a research scientist at the U.S. Navy-funded Center for Naval Analysis, wrote.

“In truth, they were never grounded in facts, and neither were some of the more sensational statements made by certain Western leaders. Thus it should come as no surprise that none of these premonitions came true.”

Indeed, as Kofman notes, the Zapad-2017 exercise was one of the smaller such Russian wargames. “Zapad 2017 was perhaps one of Russia’s more modest annual strategic exercises to date, though that should in no way undersell its significance,” Kofman wrote. “On the whole, perhaps around 45,000 troops took place in Zapad, with maybe half that number in the Baltic and Arctic region and the rest in Southern and Central Military Districts. This figure encompasses both Russian and Belarusian troops engaged.”

While the official portion of Zapad-2017 ran for a week, there were other exercises run in conjunction with the wargame. Indeed, the smaller ancillary exercises were not part of Zapad specifically to avoid the commitments of the Vienna Document.

“The official exercise lasted only a week, but the event was a training capstone amidst a high tempo of annual qualification checks, missile tests, and a host of other drills taking place in the Russian armed forces,” Kofman wrote.

“These exercises have continued through October as part of a busy exercise season, typical for this time of year, but nonetheless making it quite difficult to discern where Zapad 2017 stops and other exercises begin. That is not a bug, but rather a feature of Russian General Staff planning, inherently obfuscating what is and what is not actually part of these large scale exercises to avoid fulfilling political commitments under the Vienna Document.”

And while Zapad did simulate a war with NATO, it was not designed to simulate a Cold War Fulda Gap scenario—as the anonymous Western intelligence sources cited by the Bild would have one believe. “The political intent was to continue a conversation Moscow has been having with the United States since Zapad-1999, and maintain coercive credibility in a potential conflict with NATO over Belarus, or elsewhere on Russia’s periphery,” Kofman wrote. “The consistent message has been that Russia has the capability and resolve to deploy forces into the region, mount an effective defense against Western superiority in airpower, and conduct offensive strikes to compel NATO to terminate hostilities.”

While Russia is undoubtedly once again a problem for NATO and the United States in Eastern Europe, grotesquely inflating the threat serves only to exacerbate tensions—and potentially could lead to miscalculations.

Image: A T-14 Armata tank during a rehearsal for the Victory Day parade in Red Square in central Moscow, May 7, 2015. Reuters/Grigory Dukor