A Republican-Controlled Congress Will Give Obama Foreign Policy Headaches 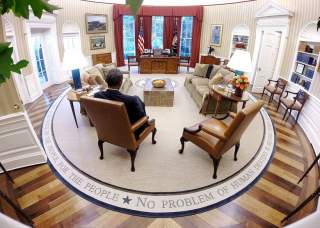 Much comment over the past several weeks has focused upon what a Republican victory on Election Day would mean for President Obama’s domestic policies, including the immigration reform package that the White House has been trying to push through unsuccessfully (not that the package fared well with Democrats in the majority either).  Will the congressional Republicans block what the administration is trying to accomplish?  Will a Republican-controlled Congress send over bills that are designed to force the president to use his veto?  And how will Democrats behave in the minority, after being the ones who called the shots in the Senate for the past eight years?”

Yet there is an equally important set of questions that need to be examined just as closely.  How will a Republican victory on November 4 affect the Obama administration’s foreign policy initiatives—some of the very same initiatives that, if successful, could stop the bleeding from the administration’s terrible poll numbers and form some sort of positive legacy for Obama and his team?

Whether the subject concerns the nuclear negotiations with Iran or the current military campaign against the Islamic State, it is very likely that a Republican Party newly dominated in the House and Senate will use committee chairmanships and majority status to set terms and change the confines of the debate.  Here are a few policy areas that could potentially complicate the administration’s efforts:

If there is one foreign policy position that unites a sometimes fractious Republican Party, it’s the common belief that the Iranians are mischievous troublemakers in the region and are not to be trusted.  Nowhere is this more present than the P5+1 nuclear negotiations with the Iranians, which are less than four weeks away from either ending in historical success or disappointing failure.

To say that Republican lawmakers are skeptical of the Obama administration’s negotiating strategy with Iran is a vast understatement.  The majority of Republicans in both houses of Congress are wholly opposed to any uranium enrichment capability and production capacity for the Iranians, underscored by the barrage of criticism that the White House received after the conclusion of the interim Joint Plan of Action agreement in November 2013.  That agreement permitted Tehran to keep its existing centrifuges running and allowed the Iranians to produce a limited amount of enriched uranium.

The deal was constructed as a holding pattern, a mechanism for the United States and its P5+1 partners to freeze the Iranian nuclear program at the current level in order to provide the political space needed for longer and more comprehensive negotiations in the future.  Republicans, like Senate Foreign Relations Committee ranking member Bob Corker, were not amused by the administration’s efforts: “it looks like we’ve tacitly agreed that they [Iran] will be enriching for commercial purposes down the road,” Corker said on Fox News Sunday a day after the JPOA was inked.  “I think it’s now time for Congress to weigh in because I think people are very concerned that the interim deal becomes the norm.”

We should all expect this type of language to not only continue but to escalate and develop into concrete legislative proposals in a Republican majority Congress.  Senators Corker, John McCain, and Marco Rubio have already filed legislation that would compel President Obama to submit any nuclear deal with the Iranians to Congress for a full up-or-down vote.  Up until today, the White House has been able to count on Senate Majority Leader Harry Reid to kill any Iran-related bill that would cause the administration headaches.  A Majority Leader Mitch McConnell (if he wins a tough re-election fight) will play no such role.

There was impressive support from Republicans when President Obama ordered U.S. airstrikes against ISIL positions in Iraq and in Syria in early August.  Senator Saxby Chambliss, the ranking member of the Intelligence Committee, expressed hope that U.S. airstrikes would result in a significant degrading of ISIL’s military capability.  Minority Leader McConnell applauded Obama’s decision to keep the Congress informed during the campaign, and even Minority Whip John Cornyn stated in a press release that he supported the president’s decisions (he would later call on Obama to submit an authorization for the use of military force to the Congress).

With the air campaign over two months old, however, bipartisanship has given way to concern that the administration’s “no boots on the ground” strategy for degrading and ultimately destroying ISIL is both too limited and too self-restricting.  Republicans are increasing their calls for a U.S. ground component, including the deployment of U.S. Special Operations troops, to improve the Iraqi army’s chances at driving out ISIL militants and ensuring that territory cleared is held by Iraqi soldiers over the long term.  The most outspoken proponent of a more aggressive U.S. ground presence, John McCain, will be the next Chairman of the Armed Services Committee if the Republicans are able to take the Senate.  It will be a lot harder for the White House to ignore these demands from the chairman of a powerful national security committee than from a senator in the minority.

Outside of the ‘power of the purse,’ one of the most important powers that any U.S. Congress has is the duty to monitor the executive closely and determine that the president and his top advisers are implementing policy appropriately.  Holding hearings and calling on senior administration officials to testify is the most effective and public way to do this.  While congressional hearings are often combative and tense due to the issues involved and the constant tension between the executive and legislative branches, the inauguration of a Republican-controlled Congress in January 2015 will guarantee that these exchanges will be more heated than when the president’s own party controlled the agenda.

Senator Bob Corker, John McCain, and Richard Burr are the exact opposite of what the Obama administration would refer to as Capitol Hill allies.  Unfortunately, these three people are also expected to rise to the chairmanships of their respective committees (Foreign Relations, Armed Services, Intelligence) in a Republican Senate.  With these three men in charge of such powerful committees, officials from the State Department, Pentagon, and Intelligence Community will be repeatedly grilled in a public forum (Director of National Intelligence James Clapper lucks out, given the nature of his work) and forced to defend policies that are either unpopular or ineffective.

Hearings rarely result in changes of White House policy, unless a scandal is so embarrassing that the administration has to introduce reforms to save itself from being lambasted (see the Veterans Affairs’ healthcare system, the IRS, and Ebola).  But sharp questions in full public view of the television cameras is a power in and of itself, oftentimes resulting in critical coverage on cable news.

Any hope that President Obama had in closing the Guantanamo Bay detention facility—a central promise of his first presidential campaign in 2008—will be extinguished if Republicans retake the Senate.  The restrictions that Congress has put into place, which bars the administration from using any money appropriated to the Pentagon for transferring Gitmo detainees to the United States for imprisonment or trial, ties the president’s hands on the issue and has kept the infamous prison open.  Although congressional Democrats are also wary of closing the Gitmo facility and allowing dangerous detainees to come to the United States for incarceration, it’s Republicans who have been the most passionate about obstructing the administration’s efforts at closure.

If a Senate led by a reliable administration ally like Democrat Harry Reid has not been able to amend the law by lifting the restrictions, then it’s a fool’s errand to expect a Mitch McConnell-led Senate to be any more innovative.  Despite President Obama’s desire to shutter the doors of Gitmo for good and meet a campaign promise that he clearly wished would have occurred during his first term, a Republican Congress will make the president’s job even more difficult, if not impossible—assuring that Gitmo will continue to operate even after Obama leaves office.