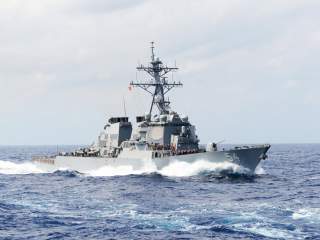 The United States has conducted another freedom of navigation operation (FONOP) in the South China Sea. On January 30, the guided-missile destroyer USS Curtis Wilbur sailed within twelve nautical miles of Triton Island, a naturally formed feature, in the Paracel islands in the South China Sea. That group is claimed by China, Taiwan and Vietnam but is occupied by China.

The purpose of the latest FONOP was much clearer than that of America’s previous FONOP in the region. In October last year, the destroyer USS Lassen sailed within twelve nautical miles of Subi Reef occupied by China in the Spratly group of islands. Uncertainty surrounding what that operation was trying to demonstrate led to U.S. Defense Secretary Ashton Carter some two months later providing a rather less than crystal-clear explanation.

The Lassen incident was confused because it took place in hotly disputed waters near one of China’s ‘artificial’ islands well off any established shipping lane. The Lassen was challenged by Chinese naval units during the transit. Strong diplomatic protests subsequently followed from Beijing to Washington.

In comparison with the Lassen incident, the Curtis Wilbur operation was a ‘soft’ FONOP. By ‘soft,’ I mean a relatively less provocative routine navigational event such as most FONOPs regularly carried out by the U.S. Navy.

The U.S. Defense Department Web site on the Freedom of Navigation (FON) program shows that the United States conducted FONOPs against nineteen countries in 2014, including China. The excessive claims by China that were the target of a FONOP were: “Excessive straight baselines; jurisdiction over airspace above the EEZ; restriction on foreign aircraft flying through an Air Defense Identification Zone (ADIZ) without the intent to enter national airspace; domestic law criminalizing survey activity by foreign entities in the EEZ.” Similar FONOPs have been made every year since 2009. The Curtis Wilbur FONOP was challenging two claims by China—the straight baselines claimed around the Paracel (Xisha) Islands and China’s requirement for prior notification of a warship transiting its territorial sea.

The Curtis Wilbur operation was also ‘soft’ because it involved a ship transiting along a well-used shipping lane past a naturally formed feature. Vessels transiting through the Paracels pass well within twelve nautical miles of various features in the group. I did so myself several years ago when travelling in a large container ship from Hong Kong to Port Klang in Malaysia. There were other merchant ships at the time doing likewise. Over the years, warships of various countries, including the United States, have probably also done so without being challenged by China. It’s an established shipping route between Guungzhou and Hong Kong in the north and Singapore Straits in the south and China so far has made no attempt to exercise control over the route.

In comparison, the Lassen case could be seen as ‘hard’ (i.e. relatively more provocative and contentious) because the ship deliberately went off any established shipping route to demonstrate a right of passage in hotly disputed waters around an ‘artificial’ island.

What’s unusual about the Curtis Wilbur operation isn’t so much the operation itself, but rather that the United States chose to give it so much publicity. Similar operations by the U.S. military haven’t been so publicized in the past. By publicizing the event, it looks as though Washington intended to stir the pot in the South China Sea. Significantly, the event occurred just two days after the head of U.S. Pacific Command, Admiral Harry Harris’s pledge to push harder on Chinese territorial claims in the South China Sea.

Immediately after the event, the U.S. Department of Defense made an official statement claiming that the operation challenged attempts by the three claimants—China, Taiwan and Vietnam—to restrict navigation rights and freedoms.

However, despite the reference to Taiwan and Vietnam, the operation was clearly aimed at China, the current occupant of Triton Island, and the major target of U.S. FONOPs in the South China Sea. Due no doubt to the nature of the operation, the Chinese response has been more muted than that to the Lassen affair, and the Chinese didn’t directly challenge the transit by the Curtis Wilbur.

What does all this mean for Australia? On the one hand, very little. Canberra should continue our established pattern of operations in the South China Sea, notably the Operation Gateway patrols and de facto FONOPs with RAN vessels occasionally sailing within the excessive territorial sea straight baselines claimed by several littoral countries to the South China Sea. Those are ‘soft’ operations.

However, on the other hand, Australia shouldn’t escalate those operations (by conducting what might be regarded as ‘hard’ operations), focus them on any particular claimant country, or give them undue publicity. Such actions would only add to tensions in the South China Sea.

Sam Bateman is a professorial research fellow at the Australian National Centre for Ocean Resources and Security (ANCORS), University of Wollongong, and also an adviser to the Maritime Security Programme at the S. Rajaratnam School of International Studies (RSIS), Nanyang Technological University, Singapore. This article first appeared in the Strategist.