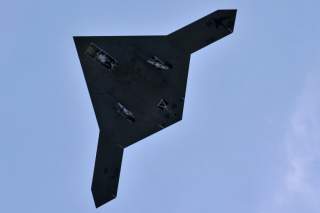 The drones of tomorrow will be stealthier, faster, more computerized, equipped for electronic warfare, more lethal, more autonomous and, in some cases, able to deploy as swarming groups of mini-drones, according to the Air Force’s Chief Scientist.
“The ISR (intelligence, surveillance, reconnaissance) side will get a lot smarter. With the next generation, you will see UAVs that are faster, more maneuverable and maybe stealthy. You will see them accompanying fighters with extra weapons, EW (electronic warfare), countermeasures and even lasers on board,” Air Force Chief Scientist Greg Zacharias told Scout Warrior in an interview.
Some of these anticipated developments were forecasted in a 2014 Air Force report called RPA (Remotely Piloted Aircraft) Vector designed to anticipate and prepare for future drone developments over the coming 25 years. However, the rapid pace of technological change has sped up and, to some extent, changed the timeline and mission scope for drones outlined in the report.

The processing speeds of computers and algorithms aimed at increasing autonomous activities have continued to evolve at an alarming rate, creating a fast-moving circumstance wherein drones will increasingly take on more and more functions by themselves, Zacharias explained.

Computer algorithms will enable drones to conduct a much wider range of functions without needing human intervention, such as sensing, targeting, weapons adjustments and sensor payload movements, ranges and capabilities, he added.

The beginning of this phenomenon is evidenced in the computers and sensor technologies of the F-35 Joint Strike Fighter; the aircraft uses a technique known as “sensor fusion” wherein information from multiple sensors is organized, interpreted and presented to pilots on a single screen.

Digital mapping, ISR information from the F-35’s Distributed Aperture System and targeting data from its Electro-Optical Targeting System are not dispersed across multiple screens which pilots try to view simultaneously. Fast evolving sensor technology, which allows for an ability to more closely view targets and tactically relevant information from increasingly farther distances, will continue to enable and improve this trending phenomenon.

One of the largest consequences of AI will likely lead to a scenario wherein multiple humans will no longer need to control a single drone – rather multiple drones will be controlled by a single human performing command and control functions.

“People will function as air-traffic controllers rather than pilots, using smart, independent platforms. A person does command and control and drones execute functions. The resource allocation will be done by humans as higher level systems managers,” Zacharias explained.

As a result, drones will increasingly be capable of working more closely with nearby manned aircraft, almost functioning like a co-pilot in the cockpit and massively expanding the mission scope of a fighter jet or other aircraft able to control targeting, sensors and weapons functions from the air nearby.

“Decision aides will be in the cockpit (of a nearby fighter jet or aircraft) and platform oriented autonomous systems will function like a wing man, for instance, that might be carrying extra weapons, helping to defend or performing ISR tasks,” Zacharias said. “We will get beyond simple guidance and control and will get into tactics and execution.”

Drones could lead the way into higher-risk areas in order to reduce risks for manned aircraft, test and challenged next-generation enemy air defenses and greatly increase the ISR and weapons ability of any given mission.

In addition, drones will become more capable of air-to-air maneuvers and attacks and no longer be primarily engineered for air-to-ground attacks. In fact, early conceptual renderings of 6th generation fighter jets and the Air Force’s in-development Long Range Strike-Bomber are being engineered for unmanned flight as well as piloted flight.

Nevertheless, although drones and unmanned fighters will rapidly become faster and more manueverable, algorithms may not sooon progress to the point where unmanned systems can respond or react to unanticipated developments in a dynamic, fast-changing environment the way a human brain could. At the same time, advances in long-range sensor technology will continue to enable aircraft to see enemies at much longer distances, massively decreasing the need for drones or unmanned systems to be able to dogfight in mid-air.

During the last decade and a half of ground wars in Iraq and Afghanistan, where U.S. forces experienced uncontested air superiority, drones were used almost exclusively for air-to-ground attacks against insurgent fighters on the run, compounds, weapons caches, bunkers and other strategically vital targets. As the Air Force looks to the future, it aims to be capable of using drones as a key part of successfully engaging near-peer competitors and potential adversaries with technological ability able to rival the U.S. edge.

Russia and China, for example, both operate 5th generation stealth fighters (the latest and greatest technology) – and Russia is known to operate some of the most sophisticated enemy air defenses in the world.  Russian-built air defenses are now better networked to one another, have faster processing speeds and are able to detect fighter aircraft on a wider range of frequencies, making it much more difficult for even stealthy fighters and bombers to operate.

These potential scenarios, now being studied by Pentagon analysts, involve developing an ability to operate in what is called a “contested environment,” where enemies operate advanced air defenses, 5th generation fighter jets and long-range precision-guided weapons.

“You need to increasingly be able to react more to your environment in the air, addressing unanticipated failures and threats coming after you,” Zacharias added.

Zacharias explained that many of these developments will come to fruition more fully through ongoing training, simulations and live virtual constructions designed to assess various expected scenarios.

Faster computer processing power will also better enable an ability to organize and streamline the massive amount of collected ISR data. If a drone loiters over strategically important areas for hours upon hours, computer algorithms will increasingly allow the platform to identify important tactical information by itself.

“Right now we are using lots of bandwidth to send our real-time video. One of the things that we have is smarter on-board processors. An RPA (drone) can orbit around a given target and have it look, for instance, for a relevant white pick-up truck, instead of having human operators do that,” he said. “This requires image processing, pattern recognition. Then you could just send a signal instead of using up all this bandwidth saying ‘hey I just saw something 30 seconds ago you might want to take a look at the video feed which I am sending right now.’”

The ability for a single human to control multiple drones could bring a number of implications, such as an ability to effectively use a swarm of small drones. Air Force scientists have explained that emerging algorithms are increasingly able to allow large numbers of small, mini-drones to operate in unison without hitting one another. For instance, they could collectively work to jam or overwhelm an enemy radar system, act themselves as weapons or munitions, or cover an expansive area with ISR video feeds.

A wider arsenal of weapons will also be integrated onto drone platforms, including high-tech guided weapons able to discern and destroy enemy targets by themselves to a much greater degree. This will likely include laser weapons as well, Zacharias added.

These weapons will naturally include laser-guided AGM-114 Hellfire missiles which are the primary weapon used by today’s platforms such as the Predator, Reaper and Army Gray Eagle.  At the same time, drones or unmanned platforms are expected to fire a wider range of guided air-dropped munitions and air-to-air weapons such as the AIM-9 Sidewinder, AIM-120 AMRAAM.

Also, the Air Force is now developing an air-dropped guided weapon called the Small Diameter Bomb II. This weapon uses an emerging technology called a tri-mode seeker, which draws upon infrared, laser and millimeter wave radar technology to detect, track and destroy targets in any kind of weather environment.

At the same time, Pentagon doctrine stipulates that a human needs to be in-the-loop when it comes to the possible use of lethal force, except potentially in some rare circumstance where immediate defensive weapons are needing in milliseconds due to an incoming attack, Zacharias explained.  As a result, nearly all weapons will help distinguish, track and destroy targets under the guidance and supervision of human command and control.

Given the pace of technological change, future Air Force drones will also need to be modular, meaning they will be engineered such that they can readily exchange sensor payloads when mission requirements change or new technology emerges, Air Force officials said.

Future drones will also be much faster than the 200 to 300 miles per hour most current drones are able to travel at. Hypersonic speeds greater than Mach 5.5 may be in the very distant future; the Air Force Research Laboratory and Boeing have worked together on an emerging hypersonic test platform called the X-51A Waverider. The test vehicle has had both failed and successful test trying to launch from an aircraft and travel at hypersonic speeds. While this super-high speed technology may hold promise for possible drone applications in the distant future, it is currently regarded as a long way off and in need of much further development.