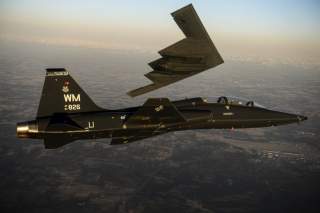 Air Force pilots of the 1980s-era stealthy B-2 Spirit bomber plan to upgrade and fly the aircraft on attack missions against enemy air defenses well into the 2050s, service officials said.

“It is a dream to fly. It is so smooth,” Maj. Kent Mickelson, director of operations for 394th combat training squadron, told Scout Warrior in an interview.

The B-2 is also moving to an extremely high frequency satellite in order to better facilitate communications with command and control. For instance, the communications upgrade could make it possible for the aircraft crew to receive bombing instructions from the President in the unlikely event of a nuclear detonation.

“This program will help with nuclear and conventional communications. It will provide a very big increase in the bandwidth available for the B-2, which means an increased speed of data flow. We are excited about this upgrade,” Mickelson explained.

The stealth aircraft uses a commonly deployed data link called LINK-16 and both UHF and VHF data links, as well. Michelson explained that the B-2 is capable of communicating with ground control stations, command and control headquarters and is also able to receive information from other manned and unmanned assets such as drones.

Information from nearby drones, however, would at the moment most likely need to first transmit through a ground control station. That being said, emerging technology may soon allow platforms like the B-2 to receive real-time video feeds from nearby drones in the air.

The B-2 is also being engineered with a new flight management control processor designed to expand and modernize the on-board computers and enable the addition of new software.

This involves the re-hosting of the flight management control processors, the brains of the airplane, onto much more capable integrated processing units. This results in the laying-in of some new fiber optic cable as opposed to the mix bus cable being used right now – because the B-2’s computers from the 80s are getting maxed out and overloaded with data, Air Force officials told Scout Warrior.

The new processor increases the performance of the avionics and on-board computer systems by about 1,000-times, he added. The overall flight management control processor effort, slated to field by 2015 and 2016, is expected to cost $542 million.

The comprehensive B-2 upgrades also include efforts to outfit the attack aircraft with next generation digital nuclear weapons such as the B-61 Mod 12 with a tail kit and Long Range Stand-Off weapon or, LRSO, an air-launched, guided nuclear cruise missile, service officials said.

The B-2 can also carry a 30,000-pound conventional bomb known as the Massive Ordnance Penetrator, Mickelson added.