Revealed: Inside the Air Force’s Shadowy B-21 Stealth Bomber 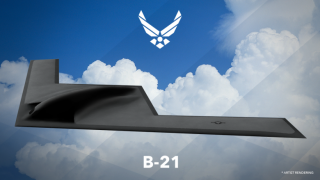 When the Air Force recently revealed its first artist rendering of what its new Long Range Strike – Bomber looks like, service Secretary Deborah James made reference to plans to engineer a bomber able elude detection from even the best, most cutting-edge enemy air defenses.

"Our 5th generation global precision attack platform will give our country a networked sensor shooter capability enabling us to hold targets at risk anywhere in the world in a way that our adversaries have never seen," James said when revealing the image.

James added that the new bomber will be able to “play against the real threats.”

The new bomber, called the B-21, will soon be named through a formal naming competition involving members of the Air Force, their families and other participants.

The Air Force has awarded a production contract to Northrop Grumman to engineer and its new bomber. The LRS-B will be a next-generation stealth aircraft designed to introduce new stealth technology and fly alongside - and ultimately replace - the service’s existing B-2 bomber.

“With LRS-B, I can take off from the continental United States and fly for a very long way. I don’t have to worry about getting permission to land at another base and worry about having somebody try to target the aircraft. It will provide a long-reach capability,” Lt. Gen. Bunch, Air Force Military Deputy for Acquisition, told Scout Warrior in an interview several months ago.

The new aircraft is being engineered to evade increasingly sophisticated air defenses, which now use faster processors, digital networking and sensors to track even stealthy aircraft on a wider range of frequencies at longer ranges.