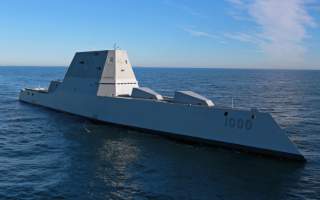 The ship, called the DDG 100 or USS Zumwalt, departed Bath, Maine, with a crew of assessment professionals on board called the Navy’s Board of Inspection and Survey, or INSURV.

“This underway period is specifically scheduled to demonstrate ship systems to the Navy's Board of Inspection and Survey and the ship will return to port upon conclusion of the demonstrations,” Navy spokesman Matthew Leonard told Scout Warrior in a written statement.

The USS Zumwalt, the first in a series of three next-generation destroyers planned for the fleet, is slated to be operational by 2019, he added. The new ship will formally deliver to the Navy later this year.

“DDG 1000 delivery is expected after successful Acceptance Trials and will include fully capable Hull Maintenance and Electrical (HM&E) systems.  Following HM&E delivery, and a brief crew certification period at Bath Iron Works, the ship will sail to Baltimore for commissioning (which is scheduled for Oct. 15) and then transit to its homeport in San Diego where Mission Systems Activation will occur,” Leonard added.

Before beginning Acceptance Trials, the DDG 1000 went through a process known as “Builder Trials” during which the contract building the ship, Bath Iron Works, tests the ship’s systems and technologies.

Not only does the ship have a new electric drive system for propulsion as opposed to diesel or steam –but the ship is configured with sonar, sensors, electronics, computing technology and weapons systems which have not previously been engineered into a Navy destroyer or comparable ship, said Raytheon officials said.

The Zumwalt-class destroyers will have unprecedented mine-detecting sonar technologies for destroyer through utilization of what’s called an integrated undersea warfare system, or IUW; IUW is a dual-band sonar technology which uses both medium and high-frequency detection, Raytheon developers explained.

Medium sonar frequency is engineered to detect ships and submarines, whereas high-frequency sonar adds the ability to avoid sea-mines, they added.

The ship’s integrated power system, which includes its electric propulsion, helps generate up to 58 megawatts of on-board electrical power, something seen as key to the future when it comes to ship technologies and the application of anticipated future weapons systems such as laser weapons and rail guns.

The ship is also built with a new kind of vertical launch tubes which are engineered into the hull near the perimeter of the ship.  Called Peripheral Vertical Launch System, the tubes are integrated with the hull around the ship’s periphery in order to ensure that weapons can keep firing in the event of damage.  Instead of having all of the launch tubes in succession or near one another, the DDG 1000 has spread them out in order to mitigate risk in the event attack, developers said.