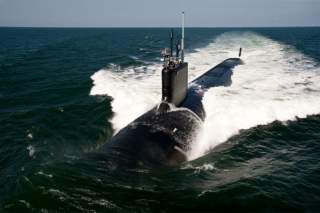 The discussions, involving lawmakers and senior members of the Navy, are still very preliminary and in the early stages. The possibility being considered includes the prospect of building more Virginia-Class submarines per year – instead of the amount called for by the current ship-building plan.

The current status-quo effort to build two Virginia-Class boat per year, however, will drop to one as construction of the Ohio Replacement Program, or ORP, begins in the early 2020s.

The possibility now being deliberated is whether, at this future point in time, the Navy and industry could produce two Virginia-Class boats and one Ohio Replacement submarine per year, increasing the current plan by one Virginia-Class boat per year.

Increasing production hinges on whether the submarine-building industry has the capacity to move up to three submarines per year, the Congressional source said.

Current budget constraints and industrial base capacity limitations may make building three submarines per year too difficult to accomplish, even if the desire to do so was there from both Congressional and Navy leaders.

While Navy officials, including Navy Acquisition Executive Sean Stackley, did tell lawmakers on the House Armed Services Committee Sea Power and Projection Force Subcommittee, production changes could emerge in the future, depending upon funding and industrial base capabilities.

Stackley explained that the service would like to maintain a two per-year production schedule for Virginia-Class attack submarines, even after production of the ORP begins.

“We are working today, and we hope and expect you to work with us, to determine how can we keep two Virginias a year proceeding within all the fiscal constraints and within the limitations of the industrial base, to address this compelling requirement for the nation," Stackley told lawmakers.

In the past, various sub-building industry executives have indicated that this might be possible, however such a prospect has not yet been formally confirmed as it would likely involve an increase in resources, funds and man-power.

One industry source told Scout Warrior that the submarine building community would support whatever the Navy and Congress call for.

The prospect of an acceleration comes as Navy commanders tell Congress they would like to see the fast arrival of more Virginia-Class attack submarines added to the Pacific Fleet.

Pacific Commander Harry Harris told Congress that he would like to see more submarines in his area of operations.

“The Pacific is the principle space where submarines are the most important warfighting capability we have. As far as Virginia-Class submarines, it is the best thing we have,” Harris told lawmakers. “As I mentioned before, we have a shortage in submarines. My submarine requirement is not met in PACOM (Pacific Command).”

Virginia-Class attack submarines are necessary for the U.S. to maintain its technological superiority over rivals or potential adversaries such as Chinas, Harris added.

With their technological edge and next-generation sonar, the platform can successfully perform crucially important intelligence and surveillance mission in high-risk areas inaccessible to surface ships.  For this reason, Virginia-Class attack submarines are considered indispensable to the ongoing Pentagon effort to overcome what’s talked about in terms of Anti-Access/Area-Denial wherein potential adversaries use high-tech weaponry and sensors to prevent U.S. forces from operating in certain strategically vital areas.

Virginia-Class subs are fast-attack submarines armed with Tomahawk missiles, torpedoes and other weapons able to perform a range of missions; these include anti-submarine warfare, strike warfare, covert mine warfare, ISR (Intelligence, Surveillance, Reconnaissance), anti-surface/ship warfare and naval special warfare, something described as having the ability to carry and insert Special Operations Forces, Navy program managers have said.

“What enables this is the ship control system that we use. You can drive the ship electronically. This allows you the flexibility to be in littorals or periscope depth for extended periods of time and remain undetected,” former Virginia-Class attack submarine program manager Capt. David Goggins said several years ago.

The Virginia-Class submarine are engineered with this “Fly-by-Wire” capability which allows the ship to quietly linger in shallow waters without having to surface or have each small move controlled by a human operator, Goggins added.

“There’s a person at the helm giving the orders of depth and speed. There’s always a person in the loop. The software is telling the planes and the rudder how to move in order to maintain a course and depth. You still have a person giving the electronic signal,” he said.

Also, unlike their predecessor-subs, Virginia-Class subs are engineered with what’s called a “Lock Out Trunk” – a compartment in the sub which allows special operations forces to submerge beneath the water and deploy without requiring the ship to surface, service officials explained.

“SEALs and Special Operations Forces have the ability to go into a Lock Out Trunk and flood, equalize and deploy while submerged, undetected. That capability is not on previous submarine classes,” Goggins added.

Thus far, more than ten Virginia-Class subs have been delivered to the Navy, and seven are currently under construction.  Like other programs, the Virginia-Class submarines are broken up into procurement “Blocks.”

Blocks I and II totaling ten ships, have already been delivered.

“For each one of these tubes you have hydraulics and you have electronics. What we did for Block III is we went to two very large Virginia Payload Tubes – now you have two tubes versus twelve. It is much easier to build these two tubes,” Goggins said.

Although the new tubes were conceived and designed as part of what the Navy calls its “Design for Affordability” strategy to lower costs, the move also brings strategic advantages to the platform, service officials say.

“In the future, beyond Tomahawk -- if you want to put some other weapon in here-- you can,” Goggins said.

Also, for Block V construction, the Navy is planning to insert a new 97-foot long section designed to house additional missile capability. In fact, the Navy has already finished its Capabilities Development Document, or CDD, for what’s called the “Virginia Payload Modules.”

The Block V Virginia Payload Modules, or VPM, will add a new “module” or section of the submarine, increasing its Tomahawk missile firing capability from 12 to 40.

The idea is to have additional Tomahawk or other missile capability increased by 2026, when the “SSGN” Ohio-Class Guided Missile Submarines start retiring in larger numbers, he explained.

Navy engineers have been working on requirements and early designs for a new, 70-foot module for the Virginia-class submarines engineered to house an additional 28 Tomahawk missiles.

The reason for the Virginia Payload Modules is clear; beginning in the 2020s, the Navy will start retiring four large Ohio-class guided-missile submarines able to fire up to 154 Tomahawk missiles each. This will result in the Navy losing a massive amount of undersea fire power capability, Goggins explained.

“When the SSGNs retire in the 2020s – if no action is taken the Navy will lose about 60-percent of its undersea strike launchers. When we design and build VPM and start construction in 2019, that 60-percent shortfall will become a 40-percent shortfall in the 2028 timeframe. Over time as you build VPM you will eliminate the loss of firepower. The rationale for accelerating VPM is to potentially mitigate that 40-percent to a lower number,” Goggins explained.