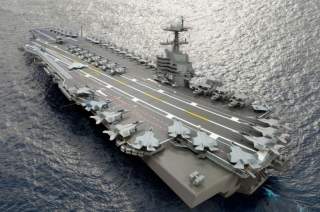 The Navy may consider alternative aircraft carrier configurations in coming years as it prepares for its new high-tech, next-generation carrier to become operational later this year, service officials have said.

Once its delivered, the new carrier will go through “shock trials” wherein its stability is testing in a variety of maritime conditions; the ship will also go through a pre-deployment process known as “post-shakedown availability” designed to further prepare the ship for deployment.

Navy leaders are now working on a special study launched last year to find ways to lower the costs of aircraft carriers and explore alternatives to the big-deck platforms.

The Navy study is expected to last about a year and will examine technologies and acquisition strategies for the long-term future of Navy big-deck aviation in light of a fast-changing global threat environment, service officials said.

Although no particular plans have been solidified or announced, it seems possible that these future carriers could be engineered with greater high-tech sensors and ship defenses, greater speed and maneuverability to avoid enemy fire and configurations which allow for more drones to launch from the deck of the ship. They could be smaller and more maneuverable with drones and longer-range precision weapons, analysts have speculated. At the same time, it is possible that the Ford-Class carrier could be adjusted to evolve as technologies mature, in order to accommodate some of the concerns about emerging enemy threats. Navy engineers have designed the Ford-Class platform with this ability to adapt in mind.

As technology evolves, laser weapons may eventually replace some of the missile systems on board aircraft carriers, Navy leaders have said.

"Lasers need to get up to about 300 kilowatts to start making them effective. The higher the power you get the more you can accomplish. I think there will be a combination of lasers and rail guns in the future. I do think at some point, lasers could replace some existing missile systems. Lasers will provide an overall higher rate of annihilation," Rear Adm. Thomas Moore, Program Manager for Carriers, said last year.

Regarding the potential evaluation of alternatives to carriers, some analysts have raised the question of whether emerging technologies and weapons systems able to attack carriers at increasingly longer distances make the platforms more vulnerable and therefore less significant in a potential future combat environment.

For example, a recently release think tank study from the Center for New American Security says the future threat environment will most likely substantially challenge the primacy or superiority of U.S. Navy carriers.

The U.S.-China Economic and Security Review Commission, a Congressional panel of experts, published a detailed report in 2014 on the state of Chinese military modernization. The report cites the DF-21D along with numerous other Chinese technologies and weapons. The DF-21D is a weapon referred to as a "carrier killer."

While China presents a particular threat in the Asia Pacific Theater, they are by no means the only potential threat in today's fast-changing global environment. A wide array of potential future adversaries are increasingly likely to acquire next-generation weapons, sensors and technologies.

“Some countries, China particularly, but also Russia and others, are clearly developing sophisticated weapons designed to defeat our power-projection forces,” said Frank Kendall, the Pentagon acquisition chief said in a written statement to Congress in January of last year. “Even if war with the U.S. is unlikely or unintended, it is quite obvious to me that the foreign investments I see in military modernization have the objective of enabling the countries concerned to deter and defeat a regional intervention by the U.S. military.”

Enemy sensors, aircraft, drones and submarines are all advancing their respective technologies at an alarming rate - creating a scenario wherein carriers as they are currently configured could have more trouble operating closer to enemy coastlines.

At the same time – despite these concerns about current and future threat environments, carriers and power projects – few are questioning the value, utility and importance of Navy aircraft carriers.

The Navy is working on number of next-generation ship defenses such as Naval Integrated Fire Control –Counter Air, a system that uses Aegis radar along with an SM-6 interceptor missile and airborne relay sensor to detect and destroy approaching enemy missiles from distances beyond the horizon. The integrated technology deployed last year.

Stealth fighter jets, carrier-launched drones, V-22 Ospreys, submarine-detecting helicopters, laser weapons and electronic jamming are all deemed indispensable to the Navy’s now unfolding future vision of carrier-based air power, senior service leaders said. Last year, the Navy announced that the Osprey will be taking on the Carrier On-Baord Delivery mission wherein it will carry forces and equipment on and off carriers while at sea.