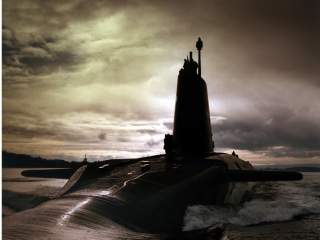 For the British Parliament and much of the media, the problem is mainly the vast amounts of money spent to keep it going. According to the U.K. Ministry of Defense, the program’s total cost is £15-20 billion. Anti-nuclear campaigners give a figure of around £100 billion, give or take. At least, that’s how much it should rack up in costs over its forty-year lifespan.

However, what is less talked about is how both the submarines and the bases that maintain them have suffered from a series of glaring safety mishaps.

There are four Vanguard-class ballistic missile submarines currently in service with the Royal Navy. These 149.5-meter long, nuclear-powered vessels are relatively new—all of them having launched in the 1990s—but are aging fast.

Each Vanguard-class submarine can carry up to sixteen Trident II missiles, each one packing twelve independently-targetable nuclear warheads, meaning the nukes split off from the missile and explode in multiple locations. The actual number of deployed missiles and warheads, however, is a closely guarded secret.

Her Majesty’s Naval Base, Clyde in Scotland—otherwise known as Faslane—is the main base for the Royal Navy’s Trident subs, and has been exceedingly prone to accidents. The latest details come from a Royal Navy sailor-turned-whistleblower William McNeilly who published an 18-page report before going on the run.

McNeilly, writing under the pseudonym William Lewis, attacked the “military spin doctors” that he claimed distort the public’s knowledge of safety lapses. He detailed thirty accidents which range from the chilling to the ridiculous.

Among these were a fire in a missile compartment caused by a toilet roll set too close to a cable, a range of problems with hydraulic systems and a general failure to follow safety procedures. The document also makes it clear that a number of safety issues were due to heavy cutbacks, resulting in a lack of qualified personnel.

But according to independent nuclear safety expert John Large, it’s possible that McNeilly, who was discharged after going on the run, could have misinterpreted some of the things he saw. However, in light of other revelations regarding the safety of the program, they seem all the more chilling.

Between 2008 and 2013, the Ministry of Defense recorded a total of 316 “nuclear safety incidents.” This overarching categorization includes everything from radioactive contamination to failing to follow standard safety protocols.

Another ministry report released two years prior gave a more detailed breakdown of safety breaches at Faslane. According to its findings, detailed in the Scottish newspaper The Herald, three quarters of the 262 incidents recorded between 2008 and 2012 were due to human error.

The Ministry of Defense responded to the figures by stating that “none of the events in the reports caused any harm to the health of any member of staff on the naval base or to a member of the public.”

There are other concerns about safety at a different naval base in the United Kingdom—the Devonport dockyard, which is the largest naval base in Western Europe.

The most frightening of these accidents was the loss of power to the “nuclear ring” reactor cooling system of one submarine for 90 minutes. Had power not been restored, such an incident could have had potentially catastrophic consequences resulting in a major nuclear incident.

The dockyard is within walking distance of the city of Plymouth, home to around 250,000 people. Most of these residents would be in danger in the event of a reactor meltdown.

In 2011, a previously classified document authored by the base’s ex-safety regulator Commodore Andrew McFarlane warned that the reactors powering nuclear submarines based at Devonport were possibly unsafe.

All pressurized water reactors are potentially vulnerable to a structural failure of the primary circuit causing rapid boiling off most of the cooling water. This results in the failure of the fuel cladding and the release of highly radioactive fission products outside the reactor core. While further containment provided by the submarine’s hull may contain the majority of the material inside the submarine, some leakage is likely to occur and, in any event, the radioactive “shine” from the submarine poses a significant risk to life to those in close proximity, and a public safety hazard to those out to 1.5 [kilometers] from the submarine.

That would put almost a third of the population of Plymouth in harm’s way in the event of an accident. This is a terrifying prospect. Equally so is the possibility that a submarine’s reactor might fail while underway, which could result in an event similar to what occurred on the ill-fated Soviet submarine K-19 in 1961.

In April, the U.K. Office for Nuclear Regulation served the dockyard with a notice to enforce safety procedures. The ONR had previously demanded that the base rectify its apparent inability to protect workers from contamination after several received an accidental dose of radiation.

An additional problem at the dockyard stems from the rusting hulks of older, decommissioned submarines. These are the relics of the U.K.’s Cold War fleet no longer needed since the government scaled back its nuclear capability. There are currently eight laid up submarines at Devonport that still contain nuclear fuel. In the core of each submarine there are about 25 tons worth of nuclear fuel rods.

The process of defueling the submarines ended in 2002 after the contractors working at the site said the facilities were out of date. Yet more submarines keep arriving, with another four due to arrive within the next seven years. The aging Vanguard-class subs will eventually join this collection.

A House of Commons vote to renew Trident is expected in 2016.

After that, a fleet of replacement submarines will enter service in the early 2030s . . . if everything goes to plan. However, that is still a long way off, and the current class of Vanguard submarines will needs increasing amounts of maintenance to keep them running through the next decade.

The issue of Trident is back in the political limelight again with the current Labour Party and opposition leader Jeremy Corbyn looking to put scrapping the program on his party’s political agenda. In the meantime, it remains to be seen whether the Ministry of Defense will take any action on the program’s safety.

Tom Barlow Brown writes for War is Boring, where this article first appeared.