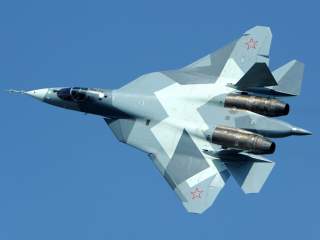 Even before its first fifth-generation stealth fighter completes development, Russia has embarked on developing sixth and even seventh-generation follow-ons to the Sukhoi T-50 PAK-FA. Indeed, Sukhoi has already presented initial concepts for a new sixth-generation fighter to the Russian government.

"They have really come up with the designs for the creation of the sixth-generation fighter,” Russian deputy Prime Minister Dmitry Rogozin told the Moscow-based TASS News agency on Wednesday. “I’m referring also to new design concepts briefly presented by the Sukhoi design bureau and by the general designer appointed for all aircraft systems and armaments.”

Meanwhile, most of Russia’s aircraft development efforts are focused on testing the PAK-FA fifth-generation fighter. Like the Pentagon, the Russian military plans decades ahead. In many ways, the Russian sixth-generation concept is akin to the U.S. Air Force’s F-X Next Generation Air Dominance effort to replace the Lockheed Martin F-22 Raptor or the U.S. Navy’s F/A-XX program.

Like the United States, Russia too is exploring concepts like manned-unmanned teaming. “It [the plane] will be modified in both versions,” Col. Gen. Viktor Bondarev, commander of the Russian Aerospace Forces told TASS. However, there are very few additional details available about the new Russian effort.

Moscow has embarked on an ambitious rearmament plan—which includes numerous new developmental efforts. Among those are new tanks, ships, submarines and several new aircraft including a new stealth bomber. However, how the Kremlin expects to pay for those developments is an open question given the state of Russia’s economy and the persistent low price of oil on the global market.

Nonetheless, Russia is not just aiming to develop a follow-on to the PAK-FA, Moscow is looking far beyond the current horizon. “"If we stop, we will stop forever,” Bondarev said. “Therefore, the work is going on—on the sixth and perhaps the seventh (generation) fighters.”

Neither Bodarev nor Rogozin provided a timeline, but according to Russian state-owned media, work on the program will start in the next few years.