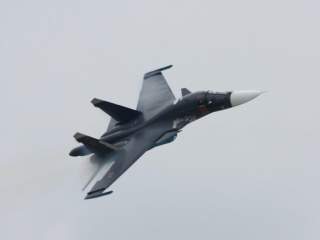 Russia is on the verge of securing its first export order for the Sukhoi Su-34 Fullback bomber. Algeria is likely to become the first of many new customers for the new long-range strike aircraft.

Moscow has powerful long-range interdiction aircraft used to great effect during its air campaign Syria. Russia’s intervention in Syria has served not only remind many in the West that Moscow remains a force to be reckoned with, but also that in many respects, Russia has made many technological strides in the years since the demise of the Soviet Union.

Impressed by the Su-34 Fullback’s performance over Syria, Algeria—which is dealing with its own Islamic insurgencies—has asked Moscow to supply it with the Su-32 export version of the new bomber. The North African nation already operates another advanced derivative of the versatile Flanker airframe called the Su-30MKA, but the Fullback bomber variant adds a dedicated strike capability.

“We have resumed talks on the sale of export Su-32 bombers to Algeria,” Sergey Smirnov, director general of the Novosibirsk Aircraft Production Association told the Moscow-based newspaper Vedomosti.  “We’ve had talks with this country over the last eight years, but they have not taken any steps on their part. But recently Rosoboronexport received an official application from Algeria to supply our aircraft.”

Meanwhile, the production of Russia’s domestic Su-34 continues at a steady pace of roughly eighteen aircraft per year until 2020. But the jet has not yet reached its full potential, Smirnov said. The Su-34 will continue to be improved based on combat experience and its capabilities will be expanded. These modifications could include additional electronic warfare (EW), intelligence, surveillance and reconnaissance (ISR) and other capabilities added via external pods, Smirnov said. “After a year or two, I think, our factory will start production of the modernized Su-34,” he said.

The Su-34 will eventually replace Russia’s increasingly decrepit fleet of Cold War-era Su-24 Fencer strike aircraft. Like the Fencer, the Fullback has side-by-side seating. Unlike the Fencer, the Su-34—taking full advantage of its Flanker lineage—is provisioned with a formidable air-to-air self-defense capability.

In addition to short-range R-73 high off-boresight dogfighting missiles, the Su-34 carries the long-range radar-guided R-77 air-to-air missile. That means like its nearest Western equivalent, the Boeing F-15E Strike Eagle, the Fullback able to conduct “self-escorted” strike missions. It also has an unorthodox rearward facing radar to warn the crew about threats approaching from behind.

While the Su-34 is capable of air-to-air combat in an emergency, the Fullback is a strike aircraft. The aircraft has a roughly 700 mile combat radius on internal fuel but is provisioned for aerial refueling with a probe and drogue system. Because the jet is expected to remain aloft for hours at a time, the Russians have uncharacteristically provided for crew comfort. The cabin has overhead space behind the ejection seats, which allows the pilots to stand up and even move around to an extent.

The core of the Fullback’s sensor suite is the Leninets B-004 passive electronically scanned array radar. The system uses the same basic phased array radar technology found on other Flanker variants, but is optimized for air-to-ground operations. It’s not clear what kind of capability the system offers, but it is thought be able to engage air-to-air targets at 75 miles and air-to-surface targets at more than 60 miles—at the very least, and probably much further out than that. The radar also provides synthetic aperture radar mapping and ground moving target indication capability.

The Fullback, which is powered by a pair of 27,500lbs Saturn AL-31F turbofans and can carry about 17,600lbs of ordnance on twelve hardpoints. The jet carries a range of stand-off air-to-ground missiles including Kh-59ME, Kh-31A, Kh-31P, Kh-29T, Kh-29L and the S-25LD, which are designed to hit a variety of ground and maritime targets. It also carries a host of rockets, guided and unguided bombs (laser, electro-optical and satellite)—including RBK-500 and SPBE-D cluster bombs.

However, the Su-34 does not yet have a suitable electro-optical/infrared targeting pod that is comparable in performance to the latest Western equivalents like the LITENING-SE or Sniper-ATP. Even traditional Russian customers like India use the Israeli LITENING III or Russia itself considered using French Damocles pods since Moscow didn’t have an equivalent. However, it seems that a domestic Russian targeting pods is under development.