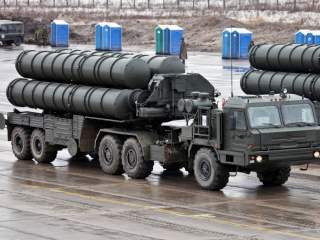 Russia will soon be fielding the powerful S-500 integrated air and missile defense system, which is currently under development by the Moscow-based defense firm Almaz Antey.

Is not clear if the new weapon—which is referred to as both the S-500 Prometey and as the 55R6M Triumfator-M—is an upgraded variant of powerful S-400 (pictured) that Russia recently deployed to Syria or a clean-sheet design. However, what is known is that the new S-500 boasts impressive capabilities and will pose an even greater threat to allied air power than its predecessors once it becomes fully operational.

Earlier reports had suggested that the S-500 would enter service in 2017. There is little solid information about the new missile defense system available—but there are some indications that it is a completely new design. “Work is underway to create a new fifth-generation air defence system S-500 which can destroy aerodynamic and ballistic targets of all types at all altitudes used in combat,” Russian deputy defense minister Yuri Borisov told TASS in 2014.

The S-500 is expected to able to detect and simultaneously attack up to ten ballistic missile warheads flying at speeds of up to 23 thousand feet per second. It is also reportedly being designed to use hit-to-kill interceptors—a design with similarities to Lockheed Martin's Terminal High Altitude Area Defense (THAAD). It may have a range as great as 373 miles and hit targets as high as 115 miles. That means the S-500 will be able to intercept warheads incoming from space.

Like all modern Russian air defense systems, the S-500 is expected to be highly mobile and will use a network of radars for targeting over vast distances. The missile system is expected to use the 91N6A(M) battle management radar, a modified 96L6-TsP acquisition radar, as well as the new 76T6 multimode engagement and 77T6 ABM engagement radars, according to Missile Threat—which is run by the George C. Marshall and Claremont Institutes. The S-500s are also expected to be networked with their S-400 and S-300 predecessors as part of an overall integrated air-defense network.