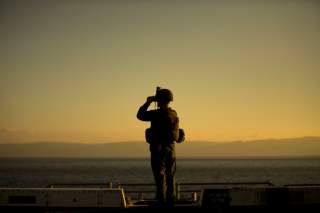 The ominous shadow of the notorious Islamic State of Iraq and Syria (ISIS) looms over Southeast Asia and Australia, judging from the scores of recent arrests throughout the region.

In order to neutralize ISIS, it is important to understand what we are confronting. Synthesizing various analyses of the entity appears to provide the following composite picture: ISIS seeks to create a geographically demarcated Islamic political entity that is potentially expansionist. The leadership of the organization is hierarchical and comprises a curious mix of hardline Islamic fundamentalists combined with genuine strategic and operational nous provided by disaffected and radicalized former Baathists of Saddam Hussein’s decimated military.

The core fundamentalist theology of ISIS emphasizes a deity that is punitive, keen on preserving religious purity above else. Consequently outsiders—Muslims who disagree with them; Shia, Christians and other minority groups and their religious symbols—can be disposed of as they are regarded as filth to be cleansed, not parties to a negotiable dispute.

Such an extreme religious narrative readily cloaks the base motivations of the many thugs who have been drawn into the movement and who rape, mutilate and kill for sadistic pleasure. The ensuing political ideology issuing from such a puritanical theological core is a version of Salafi jihadism, whose political goals appear to be as totalistic as its essential theological assumptions.

In the basic ISIS worldview, Islam must dominate all comers, by force if need be. Hence there is no logical reason to assume that ISIS leaders will be content with securing territory in Iraq–Syria only. If they can, they will expand further. Little wonder that they have sought to expand their influence into Taliban territory in Afghanistan–Pakistan and Libya; while conversely, similarly motivated violent Islamist entities such as Boko Haram in eastern Africa, and the East Indonesian Mujahidin in eastern Indonesia have pledged allegiance to it as well.

We are witnessing an institutional evolution of global jihadism in the Iraq–Syria region with potentially seismic worldwide implications. In short, ISIS is the new, improved, more resilient ‘mutation’ of al Qaeda.

Like its older, rapidly-declining, al Qaeda incarnation, ISIS does not seek to directly engage and defeat the armed might of its chief enemies: the ‘Jews and Crusaders’ – Israel, the U.S. and their coalition allies—as per stock Salafi jihadi narratives. ISIS has apparently adopted but refined the original al Qaeda ‘indirect’ strategy of aiming at the true centre of gravity of the Western and allied coalition: its largely multicultural publics.

The main political goal of this strategy appears to be to consolidate and opportunistically expand its self-proclaimed Islamic caliphate. ISIS’ objectives involve destabilizing and ultimately collapsing the fragile ‘near enemies’ of the Shia-aligned regimes in Damascus and Baghdad, as well as simultaneously corroding the political will of the ‘far enemies’ of Western coalition countries to carry on the struggle against it.

In line with this indirect strategy, ISIS emphasizes primarily non-kinetic means of expanding its power and influence. As much or possibly more thought and effort appear to be put into employing social media to attract followers worldwide to its religiously-legitimated enterprise of rebuilding the lost Islamic caliphate.

Social media—a weapon al Qaeda never really fully exploited—has truly been a force multiplier for ISIS. Thus not only untrained Muslim fighters, but trained military and law enforcement officers, as well as civilian professionals, and, as we have seen, entire families, have been targeted to conduct a hijrah (migration) to the caliphate to populate it and build up the ‘perfect’ Islamic society.

Even generally moderate Muslim societies like Malaysia and Indonesia have been affected by this skillful ISIS appeal. Meanwhile, another key element of the ISIS indirect approach has been to promote ‘crowd-sourced’ lone wolf or ‘wolf pack’ terrorism by self-radicalized supporters within Western and allied countries to internally destabilize them and sap their political will; whilst sowing discord within them between Muslim and non-Muslim communities and creating fecund conditions for the ISIS ideological virus to gestate further.  The December 2014 Sydney incident demonstrated the ISIS crowd-sourced terror tactic all too well, and Malaysian authorities have recently warned of potential lone wolf attacks as well.

In a following post I will discuss how a Western coalition ‘direct’ strategy, employing kinetic means as the principal instrument but supported by a host of non-kinetic measures, represents a potentially effective response to the ISIS indirect approach.