Revealed: The U.S. Army Is Going All-Out on Laser Weapons 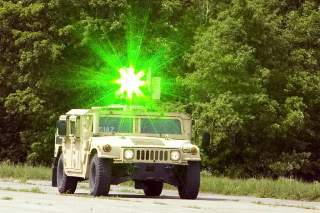 Laser weapons will protect Strykers on-the-move and Forward Operating Bases as part of an effort to save Soldiers from incoming enemy attacks such as missiles, mortars and artillery. This is the first-ever integration of a laser weapon onto an Army combat vehicle.

Concept vehicles are now being engineered and tested at the Army’s Ft. Sill artillery headquarters as a way to quickly develop the weapon for operational service. During a test this past April, the laser weapons successful shot down 21 out of 23 enemy drone targets.

The effort marks the first-ever integration of an Army laser weapon onto a combat vehicle.

“The idea is to provide a solution to a capability gap which is an inability to acquire, track and destroy low, slow drones that proliferate all over the world,” Tim Reese, director of strategic planning, told Scout Warrior in an interview.

The weapon is capable of destroying Group 1 and Group 2 small and medium-sized drones, Reese added.

The laser, which Reese says could be operational as soon as 11-months from now, will be integrated into the Fire Support Vehicle Stryker variant designed for target tracking and identification.

General Dynamics Land Systems is now working on upgrading the power of the laser from two kilowatts of power to five kilowatts. The laser weapon system uses its own tracking radar to acquire targets in the event that other sensors on the vehicle are disabled in combat and has an electronic warfare jamming system intended to jam the signal of enemy drones. Boeing is the maker of the fire-control technology integrated into the laser weapon. The laser is also integrated with air-defense and field artillery networks.

“The energy of the laser damages, destroys and melts different components of the target,” Reese explained.

The Army is now in research and test mode, with a clear interest in rapidly deploying this technology. Reese added that GDLS anticipates being able to fire an 18-kilowatt laser from the Stryker by 2018.

One of the challenges with mobile laser weapons is the need to maintain enough exportable power to sustain the weapon while on-the-move, developers have explained.

“As power goes up, the range increases and time to achieve the melt increases. You can achieve less than one-half of the burn time,” he said.

This initiative is of particular relevance given the current tensions in Europe between Russia and NATO. US Army Europe has been amid a large-scale effort to collaborate with allies on multi-lateral exercises, show an ability to rapidly deploy armored forces across the European continent and up-gun combat platforms stationed in Europe such as the Stryker.

Laser weapons have been in development with the Army for many years, Mary Miller, Deputy Assistant Secretary, Research and Technology, told Scout Warrior in an interview several months ago.

"We've clearly demonstrated you can takeout UAVs pretty effectively. Now we are not only working on how we take out UAVs but also mortars and missiles--and eventually cruise missiles," she said.

The emerging weapons are being engineered into a program called Indirect Fire Protection Capability, or IFPC Increment 2. Through this program, the Army plans to fire lasers to protect forward bases by 2023 as part of an integrated system of technologies, sensors and weapons designed to thwart incoming attacks.

At the moment, Army soldiers at Forward Operating Bases use a system called Counter Rocket, Artillery, Mortar – or C-RAM, to knock down incoming enemy fire such as mortar shells. C-RAM uses sensors alongside a vehicle-mounted 20mm Phalanx Close-in-Weapons-System able to fire 4,500 rounds per minute. The idea is to blanket an area with large numbers of small projectiles as a way to intercept and destroy incoming artillery, rocket or mortar fire.

Also, lasers bring the promise of quickly incinerating a wide range of targets while helping to minimize costs, Miller explained.

"The shot per kill (with lasers) is very inexpensive when the alternative is sending out a multi-million dollar missile," Miller said.

The Army is also developing a mobile high-energy solid-state laser program called the High Energy Laser Mobile Demonstrator, or HEL MD. The weapon mounts a 10 kilowatt laser on top of a tactical truck. HEL MD weapons developers, who rotate the laser 360-degrees on top of a Heavy Expanded Mobility Tactical Truck, say the Army plan is to increase the strength of the laser up to 100 Kilowatts, service officials said.

“The supporting thermal and power subsystems will be also upgraded to support the increasingly powerful solid state lasers. These upgrades increase the effective range of the laser or decrease required lase time on target,” an Army statement said

“This was the first full-up demonstration of the HEL MD in the configuration that included the laser and beam director mounted in the vehicle. A surrogate radar (Enhanced Multi Mode Radar) supported the engagement by queuing the laser,” an Army statement said.

Miller explained how the Army hopes to build upon this progress to engineer laser weapons able to destroy larger targets at farther ranges. She said the evolution of laser weapons has spanned decades.

"We first determined we could use lasers in the early 60’s. It was not until the 90’s when we determined we could have the additional power needed to hit a target of substance. It took us that long to create a system and we have been working that kind of system ever since," Miller added.