Revealed: The US Army Just Signed Up For Jungle Warfare School 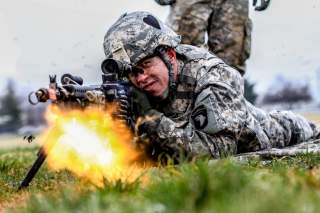 Reduced visibility, thick vegetation, emerging waterways and lush terrain all make it more difficult for Soldiers to track, find and destroy hidden enemies in the jungle – a major training emphasis for the Army as it seeks to prepare for the widest possible range of combat contingencies in the future.

US Army paratroopers with the 82nd Airborne Division and Soldiers with the 3rd Infantry Division were attacking enemies, conducting ambushes and “moving to contact” in the thick jungles of Africa as a way to better prepare for potential future combat scenarios, service officials said.

The combat exercises took place at the French Jungle Warfare School in Libreville, Gabon, a country in central Africa.

After more than a decade and a half of fighting in the Iraqi desert and mountains of Afghanistan, the Army is stepping up its training in “jungle warfare” conditions as part of a broader effort to anticipate emerging terrorist and state threats against whom the Army could be called to operate.

“In the jungle everything is in confined quarters. You do not have freedom of maneuver because of the vegetation,” 1st Lt. Blake Moore, Assistant Operations officer, 2nd brigade, 82nd Airborne, told Scout Warrior in an interview.

Soldiers participating in the jungle warfare school ran through an obstacle courses, confronted various booby traps and practiced specific tactics needed to fight in a jungle environment. These include stalking enemies in camoflauge, sniper operations and using trees and brush to launch surprise attacks.

While some infrared sensors might still be able to detect "heat" signatures through jungle leaves, trees and underbrush, electro-optical sensors and other kinds of visually-oriented technologies will operate quite differently in the jungle.

Moore explained that, despite the vastly different surveillance conditions in the jungle, most Soldier equipment is the same as what is used in desert and mountain conditions; he did, however, say that often times different boots designed to drain water and dry quickly in wet jungle conditions.

As the Army pivots beyond Iraq and Afghanistan, Africa is increasingly becoming an area for training and collaboration with allies; ISIS operates in Libya and other parts of the continent are known to harbor terrorists and their sympathizers - further underscoring the need for the US Army to strengthen its ties with allies in the region.

The jungle-warfare preparation can easilty be perceived as a key element of an overall Army strategy to move beyond recent years of counterinsurgency warfare into scenarios requiring a broader set of skills. This includes heavy mechanized force-on-force training as well as Vietnam-type jungle combat and maritime or island conflicts wherein Army Soldiers and weapons might be needed to attack targets on islands or ocean areas.