Revealed: The US Marine Corps Might Just Be Developing a Super 'Gun' 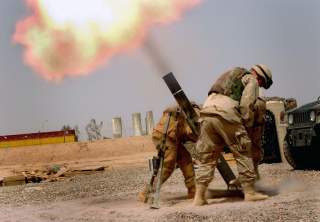 The Marine Corps and Raytheon are developing a new precision-guided 120mm explosive mortar round so that forward deployed forces can more effectively target and destroy enemies from farther distances than existing mortars.

The weapon is designed to shoot up into the air in a vertical trajectory before identifying, tracking and exploding an enemy target upon decent to the ground. The vertical landing allows the weapon to achieve great precision, Raytheon officials said.

Called the Precision Extended Range Munition, or PERM, the program is test firing a GPS-guided mortar round able to extend the range of today’s mortar weapons from about seven kilometers to about 16 kilometers, Paul Daniels, Raytheon Program Manager, told Scout Warrior in an interview.

“This doubles their range and gives them precision,” Daniels added.

The extended range could provide a key tactical advantage because 16 kilometers stand-off distance from the enemy could enable Marines to destroy enemy positions without themselves being vulnerable to incoming fire.

Raytheon was recently awarded a qualification and production contract by the Marine Corps, which plans to use the new weapon as part of its emerging Expeditionary Fire Support System, or EFSS.

This system is put together to allow forward-deployed Marines to quickly maneuver into enemy territory with precision firepower and mobility. EFSS can deploy on board an MV-22 Osprey tiltrotor aircraft, a CH-53 Super Stallion helicopter or travel from ship-to-shore as part of an amphibious operation, among other things. The new weapon will serve as part of the Corps’ fires triad which includes 155mm artillery rounds, 120mm mortars and Multiple Launch Rocket Systems, or MLRS.

PERM can fill what’s called a needed “capability gap,” because there may be some targets that are not suitable for larger 155mm artillery rounds and are better attacked by 120mm mortars.

Precision mortar fire could bring tactical advantages for Marines in combat, particularly in condensed urban areas or mountainous terrain where elevation might separate attacking forces from the enemy.

“Mortars are particularly useful. They have a very high angle and rate of fire. They can fire almost straight up,” Daniels said.

For instance, the precision targeting technology integrated into PERM could allow forces to attack enemy positions in urban areas without risking damage to nearby civilians; this kind of attack would not be possible with today’s unguided 120mm mortar rounds.

“It will be ready within a couple of years,” Daniels said.