Revealed: US Army's 'Shield' Against Missiles, Rockets, Mortars and Aircraft 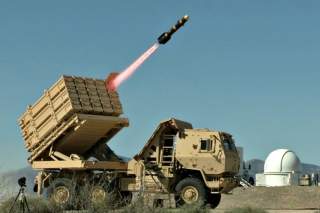 The Army fired an interceptor missile designed to protect forward-deployed forces on the ground by destroying incoming enemy fire from artillery, rockets, mortars, cruise missiles and even drones and aircraft, service officials explained.

The successful live-fire test, which took place at White Sands Missile Range N.M., demonstrated the ability of a new Army Multi-Mission Launcher to fire a weapon called the Miniature Hit-to-Kill missile. It is called "hit-to-kill" because it is what's called a kinetic energy weapon with no explosive. Rather, the interceptor uses speed and the impact of a collision to destroy approaching targets, Army officials explained.

With ISIS rocket fire killing a U.S. Marine at a firebase in Iraq recently, this emerging ground-based troop protection is the kind of system which could quickly make and operational difference for forces in combat situations.

Recent test-firings invovled an adaptation of the Hellfire missile, a 100-pound tank-killing weapons typically fired from aircraft such as Gray Eagle, Predator and Reaper drones and Apache attack helicopters, among others.

The Hellfire fire exercise demonstrated the ability to fire a second interceptor type because the Multi-Mission launcher has also fired a ground-launched Stinger anti-aircraft missile and a AIM-9X missile, an air-to-air attack weapon adapted for ground-fire troop protection.

"This is a capability that, when fully matured and fielded, will match and counter a very wide variety of sophisticated airborne threats. MML will greatly help protect our ground troops from harm's way under the most stressing battlespace operating conditions,” James Lackey, Director of AMRDEC, told Scout Warrior in a statement.“MML (Multi-Mission Launcher) gives me confidence we can do more of these types of efforts when it comes to future prototyping."

"This is a marked achievement that proves the open systems architecture of the IFPC capability works as designed.  We have demonstrated the ability to offer a multiple interceptor solution to defeat multiple threats. True multi-mission capability" Lt. Col. Michael Fitzgerald, IFPC Product Manager, said.

Weapons development experts have been using telemetry and data collection systems to assess the results of the live fire with a mind to quickly preparing the system for combat use. The weapon should be ready for combat within three to five years.