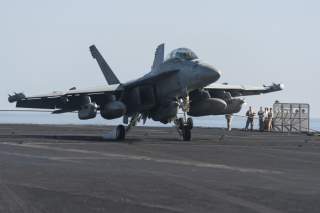 The U.S. Navy has decided to upgrade its Boeing EA-18G Growler fleet with the new high-speed Tactical Targeting Network Technology (TTNT) datalink and other new hardware following a successful demonstration of the new technologies at Fleet Experiment 2015 this summer. According to Boeing, all new Growlers currently in production will be fitted with the enhanced hardware while older jets will be retrofitted the new standard.

The enhanced hardware would allow multiple Growlers to coordinate their efforts against ever more capable enemy systems that proliferating around the world as part of the Naval Integrated Fire Control-Counter Air (NIFC-CA) battle network. According to Boeing, the upgrades include an advanced targeting processor, high-bandwidth datalink and a Windows-based tablet, which is integrated with the Growler’s mission system. The new upgrades are necessary to keep paces with an ever-changing threat environment.

“The complexity of global threat environments continues to evolve,” said Dan Gillian, Boeing F/A-18 and EA-18G programs vice president. “This long-range targeting technology is essential as we advance electronic attack capabilities for the conflicts of today and tomorrow.”

The Navy’s decision to upgrade the Growler fleet comes after the Fleet Experiment 2015 exercise validated the service’s concept to use multiple EA-18Gs to generate a “weapons quality track” against enemy emitters. Under the NIFC-CA construct, Rear Adm. Mike Manazir, the Navy’s director of air warfare, told me in December 2013 that the service would need a minimum of two airborne EA-18Gs linked via a high-speed datalink both to each other and to a third point—a Northrop Grumman E-2D Hawkeye—to perform a time distance of arrival analysis to precisely locate threat emitters.

With the three separate points, the Navy expects to be able to narrow down the location of multiple mobile threat emitters to a narrow enough “ellipse” as to generate a weapons quality track in real time. The tactic works best when there are three Growlers working in conjunction with each other—but an E-2D Advanced Hawkeye can substitute for one of the EA-18Gs. While the Hawkeye has an excellent electronic support measures suite, it has neither the capability of the EA-18G nor can it get as close to the threat.

The new technique is essential to the Navy’s plans to fight in a threat environment dominated by advanced integrated air defense systems that could include VHF radars better capable of tracking stealth aircraft and highly mobile double-digit surface-to-air missile (SAM) systems like the Russian–built S-400 Triumf (SA-21 Growler) or Chinese HQ-9.

Older techniques to suppress or destroy enemy air defenses relied on satellite imagery and long-range intelligence gathering aircraft to develop an order of battle for fixed enemy SAM sites. Those techniques are not effective against these newer, more mobile threats.