Revealed: Where Japan is Pushing Back Against China's Rising Influence 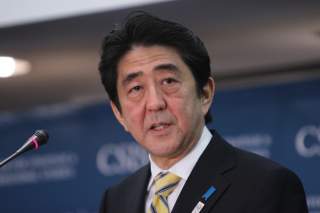 Japan held its 7th meeting with Pacific Islands Leaders (PALM7) on May 22-23. All members of the Pacific Islands Forum were represented, including Australia and New Zealand. For the first time since his coup in 2006, Fiji's Prime Minister Frank Bainimarama was invited and attended.

There was particular interest in whether Japan would expand its foreign aid to the Pacific Islands region in light of evidence of an increased Chinese presence over the last few years and the possibility that China might soon overtake Japan as the region's third-largest donor.

At the meeting, Japan promised ¥55 billion (approximately US$450 million) to the region over next three years. Prime Minister Abe declared that Japan had fulfilled a pledge to spend more than US$500 million over the last three years (2012-14). Because of the fluctuating exchange rate, the amount of Japanese aid has in reality been fairly constant over the past decade.

The fact that Japan hasn't dramatically increased aid to the region in the face of increased attention from China suggests Japan is not seeking to engage in explicit chequebook diplomacy with China in the Pacific Islands. Instead, Japan is trying to position itself as the partner of choice on issues of key concern to Pacific Islanders grappling with the effects of climate change and natural disasters. Importantly, Japan is focusing on issues which matter to the region and where Tokyo’s assistance can make the most difference.

Some media sources are reporting that Japan's entire aid pledge will target climate change and disaster risk reduction, although the communiqué doesn't specify this. In his keynote address Prime Minister Abe said that aid support was to help “foster resilient capabilities that will not be defeated by climate change or disasters.” Japan's assistance to Pacific Islands continues to include support for infrastructure development, such as constructing new port facilities in Port Vila, Vanuatu, and assistance for improving radio broadcasting services in Fiji.

Japan's commitment to assisting the region with adaptation to climate change will be welcomed by Pacific Island states. In addition to bilateral assistance, Japan will also be supporting the development of the Pacific Climate Change Centre and other capacity-building initiatives at a regional level.

Japan's US$1.5 billion contribution to the international Green Climate Fund last week means the Fund can now be made operational. The Fund needed to raise 50% of pledged funds in order to commence operations. This stands in contrast with Australia's A$200 million commitment to the Fund over four years. Japan's commitment is valuable for the region as the Fund will be an important source of additional funding for Pacific Islands seeking support for adaptation projects.

Climate change is an issue that unites the region and affects many countries deeply. The priority Japan has placed on it is also symbolic at a time when Australia's approach internationally is ambivalent.

Japan has long been an important partner for Pacific island countries. Development cooperation is a valuable aspect of its engagement but trade and investment is also significant. Japan is also a source of tourists for some countries in the region. Japan is a major client for PNG's LNG and Japanese companies are continuing to invest in Papua New Guinea. Shinzo Abe visited Papua New Guinea last year with a large business delegation.

In another sign that Japan is trying to distinguish its role in the region from that of China, the communique made clear reference to a maritime order that should be “maintained in accordance with the universally recognized principles of international law, including the United Nations Convention on the Law of the Sea (UNCLOS),” and called for countries to exercise self-restraint and peacefully resolve international disputes “without resorting to the threat or use of force.”

Some Japanese media have connected this language to concerns about Chinese maritime behavior in the Pacific Islands. However, it should really be read as applying to Japanese concerns about Chinese activities in the East and South China Seas. It is likely that the Japanese focus on a peaceful maritime order and a sustainable Pacific Ocean in this meeting is part of its wider diplomatic strategy to counter rising Chinese influence.