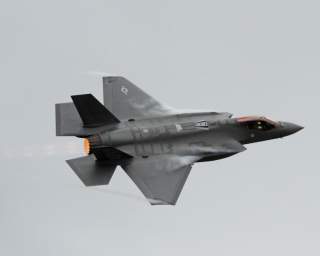 In the report, Clark Murdock argues that the United States should develop and deploy more low-yield tactical nuclear weapons to deter adversaries from engaging in low-level nuclear aggression.

Elsewhere he elaborates: “Discriminate employment options would be provided by a suite of low-yield, special-effects warheads (low collateral, enhanced radiation, earth penetration, electromagnetic pulse, and others as technology advances), including possibly a smaller, shorter-range cruise missile that could be delivered by F-35s.”

The thinking of the proposal is that America’s unmatched military power encourages potential adversaries to use nuclear weapons to offset their conventional inferiority. The danger, Murdock argues, is that adversaries would use low-yield nuclear weapons early in a conflict in order to get the United States to “back off.” Should such a scenario come to pass, America might be self-deterred from responding at the nuclear level.

“Since most U.S. nuclear response options are large, ‘dirty,’ and inflict significant collateral damage,” Murdock writes, “the United States might be ‘self-deterred’ and not respond ‘in kind’ to discriminate nuclear attacks.” Even just the possibility of potential adversaries believing this to be true could significantly increase the probability that they will use nuclear weapons in the event of a conflict with the United States.

Murdock is hardly the first analyst to foresee such a danger. For example, writing in Foreign Affairs in 2009, Keir Lieber and Daryl Press warned, “During a war, if a desperate adversary were to use its nuclear force to try to coerce the United States… an arsenal comprised solely of high-yield weapons would leave U.S. leaders with terrible retaliatory options. Destroying Pyongyang or Tehran in response to a limited strike would be vastly disproportionate, and doing so might trigger further nuclear attacks in return. A deterrent posture based on such a dubious threat would lack credibility.”

Nor is such a scenario far-fetched. Indeed, since at least 2000, Russia’s official defense posture has included a policy of “de-escalation” nuclear strikes. That is, Moscow’s official declaratory policy is that if it is faced with an overwhelmingly conventionally superior foe, it will use low-level nuclear strikes to “de-escalate” the conflict. Such a policy could easily be adopted by other states like North Korea in time of war, once it acquires deliverable nuclear warheads.

As The National Interest has warned before, the remarkable accuracy of precision-guided missiles is also making it more possible to use low-yield nuclear weapons without causing excessive collateral damage against civilian populations.

Murdock, Lieber and Press are not the only ones calling for the United States to develop more usable nuclear weapons. In the new Project Atom report, Elbridge Colby (writing with Shawn Brimley and Ely Ratner) of the Center for a New American Security also calls for a similar U.S. nuclear force.

Predictably, however, Murdock’s recommendation has some very vocal detractors. Kingston Reif, the Director of Disarmament and Threat Reduction Policy at the Arms Control Association, told Think Progress of Murdock’s recommendation: “There’s a number of reasons why this idea doesn’t make sense…. “[I don’t think that] Russia and China would understand its use to control escalation and not part of a campaign to change regimes in those countries.”

Barry Blechman, the co-founder of the Stimson Center and a co-author of the new report, is also critical of Murdock’s proposal. In his own chapter in the Project Atom report, Blechman and his co-author, Russell Rumbaugh, argue that America’s conventional superiority allows the United States to reduce the prevalence of nuclear weapons in America’s national security strategy. Later, Blechman told Think Progress that Murdock’s proposal is “terrible on so many grounds,” including that it would be “a huge waste of money” and could make it easier for terrorists to steal the nuclear devices.

Ultimately, it is unlikely that such a radical change in America’s nuclear forces will come under the Obama administration. However, these issues are something that the next American president will likely have to grapple with.