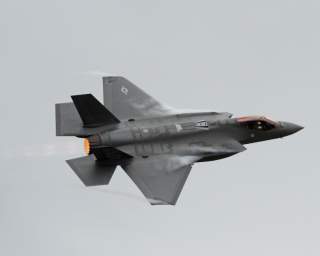 Fifteen years after development began and ten years after it first took flight, the F-35 fighter is operational with the U.S. Air Force.  This week's announcement of initial operational capability for the F-35A is arguably the most important milestone in the tri-service fighter's evolution, because the Air Force will buy over 70% of the plane's domestic production run (1,763 of 2,443 aircraft), and its variant is the version that the vast majority of overseas allies will acquire. (Editor's Note: The U.S. Air Force IOC announcement is anticipated for Aug. 2 - DM)

So it is no exaggeration to say that the Air Force buy is the linchpin of the whole program.  Without it, the cost of Navy and Marine Corps variants would be prohibitive.  The economies of scale generated by purchasing three variants with high commonality to meet the future tactical aircraft needs of the entire joint force were the inspiration for the program at its inception in the Clinton years, and they remain compelling today.  If the services stick with their plans, the F-35 will end up costing no more per plane than the legacy aircraft they replace.

That is a remarkable achievement in a business where the cost of fighter aircraft seemed to double with each successive generation after the advent of jet engines in World War Two.  The F-35 is what's known as a fifth-generation aircraft, which means it integrates advanced stealth, sensor fusion, digitally-optimized flight performance, net-enabled operations and automated logistics in a multirole aircraft far superior to anything that has come before.

Whether the mission is defeating adversary fighters or striking heavily defended surface targets or providing close air support to ground troops or collecting tactical reconnaissance or delivering non-strategic nuclear weapons, F-35 is central to joint warfighting plans through mid-century.  Without it, America probably can't win the next major war it enters.  That is especially true for the Air Force, which now operates the oldest fleet in its history thanks in part to the premature termination of the B-2 bomber (21 bought versus 132 planned) and the F-22 fighter (187 bought versus 750 planned).

The policymakers who made the mistake of killing those programs in effect left the F-35 as the "last man standing" in this generation capable of delivering sizable, survivable air power against high-end adversaries.  Although the Air Force has investigated ways of keeping legacy fighters like the F-15 airworthy longer than planned, the cost is high and the losses in wartime could be horrendous, because it is not feasible to retrofit advanced stealth into legacy planes that were not designed to host fifth-generation features.

Although stealth is central to future survivability because it makes tracking and targeting by hostile forces nearly impossible, other aspects of a fifth-gen fighter are nearly as important.  F-35 is unique in the number of on-board and off-board sensors it can integrate to deliver comprehensive situational awareness to pilots, and its secure networking technology enables all the F-35s in a combat unit to leverage that awareness in the execution of tightly coordinated tactics.  Legacy planes can't begin to match the precision of such operations.

F-35 is also highly automated, which means a single pilot can accomplish the workload previously assigned to multiple on-board and off-board warfighters.  For instance, the plane's electronic warfare suite built by BAE Systems monitors potential threats in every direction across all relevant segments of the spectrum, and will automatically deploy optimum countermeasures as required without pilot intervention.  The EW capabilities are so advanced that they allowed the Air Force to avoid developing a new generation of jamming aircraft to escort penetrating strike aircraft.

A key factor in the F-35A's design that has gotten little public mention beyond the columns of Aviation Week & Space Technology is how all these advanced technologies have been integrated into a fighter that costs a fraction of what most commercial airliners would.  The plane couldn't remain stealthy while simultaneously conducting strike, recon and jamming operations unless on-board operations were carefully managed using advanced software algorithms to maximize awareness while minimizing "signatures."  No other aircraft in the world extracts so much versatility from its sensors, jammers, processors and arrays while remaining virtually undetectable.

I could go on to talk about the F-35's advanced training systems, the "prognostic" maintenance and logistics technology, the eight million lines of on-board and 16 million lines of off-board software code.  Suffice it to say that for all its trials and tribulations, the F-35 effort has delivered the most capable tactical aircraft ever conceived.  The fact that prime contractor Lockheed Martin was able to deliver so much functionality in not one but three variants tailored to the needs of three different services and eight overseas partners makes it unique among the ranks of global aerospace companies.

The joint program office also deserves credit for keeping its industry team on track and pushing back against naysayers who didn't understand the complexities of such an undertaking.  Because contractor and customer worked together to make the F-35 program successful, the Air Force is now able to operate what Senator (and former naval aviator) John McCain has said "may be the greatest combat aircraft in the history of the world."  The Air Force has a real winner here, so it should stick with the plan to buy the full complement of planes it needs.