RIP B-2 Bomber: How America's Most Deadly Bomber Will Eventually Lose Its Stealth 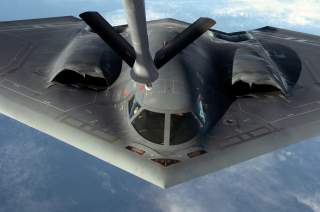 For decades since the bomber became operational in 1997, the Northrop Grumman B-2 Spirit stealth bomber has been effectively invulnerable to enemy air defenses. However, America’s enemies are starting to learn how to counter stealth aircraft, but the technology remains unproven as of yet. Various approaches have been tried to counter stealth aircraft including the use of low frequency radar, infrared, ultraviolet, bistatic and multistatic radars. Thus far, infrared search and track (IRST) and low frequency radar have shown the most amount of promise of being able to generate a weapons quality track on a stealth aircraft. Indeed, the only technology the U.S. government is willing to talk about to shoot down stealth aircraft is IRST technology.

The fact of the matter is that the B-2 will eventually lose its ability to penetrate enemy airspace. “The technology on which they were designed with respect to signature management. . . is ‘80s vintage,” then Air Force chief of staff Gen. Norton Schwartz told the House Armed Services Committee on Feb. 28, 2012. “And the reality is that the B-2 over time is going to become less survivable in contested airspace.”

The first and most obvious way to attempt to detect and track a stealth aircraft its to increase the power and processing power of a radar system as a Naval Postgraduate School paper by Serdar Cadirci describes:

“One technique to improve the detection capability of radar is transmitting more energy and using a more sensitive receiver. Although this improves the effectiveness, increasing the size and weight is required, which results in decreased mobility and increased cost. Moreover, additional sensitivity of the receiver means extra clutter and a greater number of false targets. Extra clutter and false targets overload the device and slow down the computational performance of the radar. These effects can be sorted out only with highly sophisticated processors that also increase cost. Despite these drawbacks, increasing the transmitted power and receiver sensitivity enable the radar to obtain stronger reflections from the target. Thus, more reflected power enhances radar’s capability to form the signature of the target on the radar.”

Low frequency long wave radars operating in the paradoxically named Very High Frequency and Ultra High Frequency bands are another solution, but have their drawbacks. Low frequency radars can detect stealth aircraft but cannot guide missiles on their own. As the paper referenced above explains:

“Despite such limitations, some old-fashioned Russian low-band radars, such as the 55Zh6 Nebo, 1L13 Nebo SV, Nebo SVU and 5N84 Oborona, are still operated and provide valuable early warning coverage. Moreover, these radars are thought to be very useful in guiding other precise tracking sensors and platforms. The high power aperture X-band 30N6E Flap Lid/92N2E Tomb Stone series and the 9S32M Grill Pan systems provide this kind of sector information to launch missiles from the S300PMU, S-400/S-400M and S-300VM systems. They generate small acquisition boxes to improve tracking quality and locate stealth assets by means of using an extreme amount of RF power directed towards a smaller volume of airspace. The more sophisticated Nebo SVU, Gamma DE and Protivnik GE systems are also able to directly lock on a missile with their great accuracy. After launch, the data link capability of these systems guides the missile to the target to a close range... By using such modern and low frequency radars, either for surveillance, aiding other precise systems or directly tracking targets for missile launch systems, the surprise attack advantage of stealth aircraft may be suppressed.”

“The forward scattering radar systems are designed to detect the holes or shadows formed by ‘the presence of a target blocking the signal wavefront from the transmitter.’ That hole or shadow is an EM field being scattered by the target and its pattern depends on the target’s silhouette. Thus, FSR are not affected by the eluding methods of stealth assets, which use their special shaping characteristic or RAM to reduce monostatic RCS. Although FSR systems are limited by the absence of range resolution and operation within narrow angles, low observable targets can be detected with the steep rise in the target RCS ‘ compared to traditional monostatic radar. Inverse synthetic aperture radar algorithms may improve FSR system target classification, with their high cross-range resolution and relatively simple hardware requirements. Moreover, because aircraft or missile plumes are large and contain ionized gases that affect the ionosphere, these perturbations can also be detected by FSR.”

Another unique technology to detect and potentially engage a stealth aircraft such as the B-2 is laser radar or LIDAR. As the work referenced above notes:

“LIDAR’s wavelengths, which are much shorter than traditional radar sets, provide it to have ‘high beam quality, strong directionality and high measuring accuracy.’ Utilizing these capabilities, LIDAR enhance the detection capability with functions of target identifying, posture displaying and orbit recording. If LIDAR is combined with multi static configurations, the ability of detecting low observables can be improved further. Likewise, LIDAR beams can be effectively used for detecting aircraft wakes and air turbulence. However, problems, such as dependence on weather conditions, large attenuation of laser frequencies and accuracy challenges in directing the laser beam at the aircraft effectively, should be solved prior to deploying these sophisticated designs.”

Eventually someone will figure out a way to attack a B-2. It’s just a matter of time.