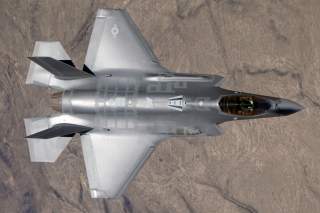 China is seeking to build a new type of satellite that would render America’s stealth technology obsolete.

This week, the Hong Kong–based South China Morning Post reported that Beijing is working on quantum ghost imaging satellites. According to the report, these satellites would have the capability to detect stealth aircraft even when they are operating in complete darkness.

“Quantum ghost imaging can achieve unprecedented sensitivity by detecting not just the extremely small amount of light straying off a dim target, but also its interactions with other light in the surrounding environment to obtain more information than traditional methods,” the report said. It added: “A satellite equipped with the new quantum sensor would be able to identify and track targets that are currently invisible from space, such as stealth bombers taking off at night.”

There is a number of different techniques it could use to do this, but basically, the “satellite would have two cameras, one aiming at the targeted area of interest with a bucket-like, single pixel sensor while the other camera measured variations in a wider field of light across the environment.” The images received from the two cameras would be analyzed using advanced algorithms. According to the article, the images would be so precise that they could identify the chemical composition of the target.

The technology behind the satellite is not especially new, and both China and the United States have developed ground-based ghost imaging systems. As The Drive explained:

“The basic principles behind ghost imaging is well established and researchers around the world have been looking into the technique for more than two decades now. At its most basic, the concept is in many ways the reverse of a traditional camera, with a pair of sensors coupled with a computer algorithm working together to essentially look for what isn’t there rather than what is. The complete arrangement looks for subtle differences in the interaction between two distinct sets of photons, particles of light, that otherwise operate identically regardless of how far they are apart, a phenomenon called quantum entanglement.”

To actually acquire satellite-based quantum ghost imaging, China will have to clear a number of technological hurdles. For one thing, the sensors need to be able to operate amid the presence of clouds and various other environmental factors that could obscure the imaging. In addition, the satellites would have to be able to cover a large area to be of any use to China. One quantum-optics physicist that spoke with the South China Morning Post said Beijing hopes to have a prototype satellite by 2020, be able to test the technology in space by 2025 and be using it on a large scale five years after that.

If the technology acts as advertised, the payoff for China would be huge. Although militaries have long sought various stealth techniques, the current generation of stealth dates back to America’s second offset strategy during the 1970s and 1980s. Along with aircraft being shaped in ways that lower their radar cross-section, America’s current stealth aircraft have special coating that absorbs microwave waves and dodges infrared systems through heat-suppression technology. This stealth technology, along with precision-guided munitions, has greatly enhanced U.S. military power, giving it the ability to dominate the skies and seas in most theatres it operates in.

Quantum ghost imaging satellites are not the only threat to America’s stealth aircraft. As Dave Majumdar has noted: “It is a well-known fact within Pentagon and industry circles that low-frequency radars operating in the VHF and UHF bands can detect and track low-observable aircraft. It has generally been held that such radars can’t guide a missile onto a target—i.e. generate a ‘weapons quality’ track. But that is not exactly correct—there are ways to get around the problem according to some experts.” Majumdar has noted that although low-frequency band radar can almost certainly detect stealth fighters like the F-22 or F-35, this technique probably wouldn’t work against systems like the B-2 bomber.

China is also pursuing quantum technology for other purposes. Most notably, Beijing has launched a quantum satellite into space to transmit data and communications. Earlier this year, Chinese scientists announced that they had transmitted messages between two long-distance points on earth using a quantum satellite in space. The benefit of this type of communication is that it is allegedly unhackable. As Michael J. Biercuk and Richard Fontaine recently explained in a must-read primer on quantum technology:

“Quantum communications seeks to enable new cryptographic protocols, using the rules of quantum physics to guarantee security. Photons, or particles of light which are widely used today in optical communications, possess a variety of physical properties that obey the rules of quantum mechanics. In quantum communications, researchers typically leverage the feature we discussed earlier — that measuring or ‘observing’ a quantum state destroys its superposition or entanglement. This measurement-means-destruction phenomenon provides a new tool to detect hacking: code your quantum message in the right way and an attempt to intercept your information will destroy it — and do so in a detectable way.”

That said, while Biercuk and Fontaine noted that quantum technology has the potential to utterly transform the world, its full promise remains unknown. Therefore, while China’s quantum satellites could doom stealth technology, at this point it only remains an aspiration.