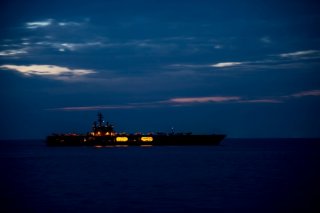 Beijing and Manila may be moving towards an accommodation that could tear a gigantic hole in the US ‘pivot’ to East Asia. Manila’s newly elected President Rodrigo Duterte has vowed to turn away from the United States and towards China if he can regain Filipino rights to Scarborough Shoal. A mercurial personality, Duterte recently cursed President Obama and demanded the removal of US anti-terrorist trainers. He has also called for an end to joint patrols with the US Navy.

Such a shift would be catastrophic for US policy in the Pacific and a low-cost Chinese victory. It would be irrational for Beijing to decline Duterte’s offer — such a decision would indicate that China is committed to a highly nationalistic and hostile course in the South China Sea, one that brooks no compromise. It might even suggest that China sees the People’s Liberation Army Navy (PLAN) as having primacy in maritime policy.

Secretary of State Hillary Clinton proposed the pivot in 2011, but little came of it because the United States was — and still is — bogged down in the Middle East. The US ‘rebalance to Asia’ lacks enthusiasm as both sides of the Pacific fear China but also desire commerce with the economic giant.

Perhaps the most enthusiastic would-be ally of the United States is Vietnam. Although the two states have endured a tortured relationship, Vietnam still has economic and Communist Party ties to Beijing. The Paracel Islands are occupied by China but in 1974 the South Vietnamese (under US advice) attempted to reclaim the closest portion of them. They failed, with bloody losses. Should Washington now support Hanoi’s claims in the Paracels?

But Duterte voices a long-simmering Filipino nationalism that seeks some freedom from United States tutelage. It has been an invidious relationship from the beginning. The 1898 war with Spain was supposed to be over Cuba, but assistant navy secretary Teddy Roosevelt — a follower of the naval theories of Alfred Mahan — ordered an attack on the pathetic Spanish fleet in Manila Bay instead. The United States quickly wrested control over the Philippines, although then US president William McKinley confessed he could not find the country on a map.

The Philippines were touted in the United States as a ‘coaling station’ that thrust Americans into Asian commerce. Most Americans liked having an empire. Filipino nationalists proclaimed a short-lived republic and Emilio Aguinaldo led a three year guerrilla war that was brutally put down by US forces. Some Filipinos still remember an American general ordering troops to ‘kill everyone over ten’.

In reaction, US students protested and figures such as Mark Twain and Andrew Carnegie founded the Anti-Imperialist League to decry the empire. Nearly forgotten, the Philippines fell to Japan in 1942 and gained independence in 1946.

Major US bases continued beyond independence at Subic Bay and Clark Field until 1992, when Manila demanded too much to renew the leases. China noted the US absence and soon seized Mischief Reef in the Spratly Islands. Now China bars Filipino fishermen from Scarborough Shoal, just 123 miles west of Subic Bay. China muscles closer, forcing Duterte into a tight corner.

Filipino culture has been described as four centuries in a Spanish convent followed by 50 years in Hollywood. ‘Discontinuity’ doesn’t quite capture it. The image of fawningly pro-American Filipinos is incomplete, with some nationalists and Muslims bitterly resentful towards the United States.

Crime flourishes in the Philippines. So far some 3,000 have been gunned down, many of them innocent. According to Duterte’s 91 per cent approval rating, Filipinos don’t seem overly concerned. Duterte bristles at US hectoring on human rights and plans to send home US Special Forces advisors and end joint naval patrols with the United States. He says the Philippines will now buy arms from China and Russia and hopes to establish a new, friendly relationship with Beijing, one not subservient to the United States.

How can the United States block Chinese expansionism if there is a gigantic hole in the ‘first island chain’ that runs from Japan through to Vietnam? An international tribunal just found for the Philippines in rejecting China’s claims to the South China Sea, a ruling Beijing said from the beginning it will ignore. Will Duterte push Filipino’s claims or seek a special deal with China?

Another part of the Asia pivot, the Trans-Pacific Partnership (TPP) — finalised last February after seven years of negotiations — seems unlikely to get Senate approval. This rare case of Obama–Republican cooperation collapsed because Hillary Clinton, Donald Trump and Bernie Sanders all denounced it as harmful to American workers. An altered and renamed TPP could conceivably pass later, with many businesses and economists saying that it will boost the US economy. Without it, an Asia pivot lacks economic feet.

Without the Philippines and the TPP, Washington will need a backup plan for the Pacific. Time may work against China. Neutralised or dominated Pacific rim countries could start to resent their Chinese masters. Or China could soon face a major economic downturn. As George Kennan cautioned during the Cold War, waiting is often the wisest course.

Michael G. Roskin retired as a political science professor from Lycoming College in Pennsylvania. He taught as a Fulbright lecturer at the University of Macau.