Rodrigo Duterte's China Lovefest: What Should America Do? 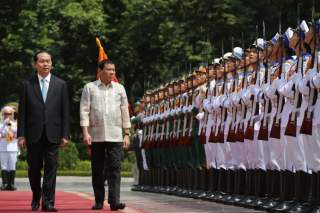 Yesterday in Beijing, the new president of the Philippines, Rodrigo Duterte, declared a new alignment with China and a “separation” from the United States. While these remarks, like so many other things he has said, will generate an extraordinary amount of press, it is worth taking a step back from the headlines consider some broader context.

Duterte’s pronouncements are not necessarily the last word on where the Philippines is headed in its alignments. And for that reason, the U.S. response should be “wait and see.” To continue the recent expansion of security relations in the face of the Philippines’ President’s palpable hostility would be foolhardy. But to respond to Duterte’s provocations in a way that damages the long-term equities in the relationship would concede leadership to a clearly unstable, unreliable, and potentially temporary phenomenon.

Relations between the US-Philippines are very deeply structural. They are signatories to a security treaty dating back more than 60 years that even Duterte says he has no interest in overturning. U.S. armed forces enjoy access to Philippines’ facilities under a 1999 Visiting Forces Agreement, and in 2014 the two nations signed an agreement to expand that access.

From 2002 to 2015, the U.S. maintained 500-600 special operations forces in the Southern Philippines helping their fight against Islamists insurgents. A small contingent remains there for similar purpose.

The U.S. is, thus, the Philippines security guarantor, as well as its principal foreign arms supplier. It has been deeply involved in advising the restructuring, reform, and supply of the Armed Force of the Philippines since 1999, and maintains a special office in the U.S. embassy called the Joint US Military Advisory Group (JUSMAG) to ease all the interactions required of the military alliance.

This summary doesn’t even begin to touch on our shared history and people-to-people ties. The Philippines, a former colony of the U.S. and host of American bases during the Cold War, is a top source of legal immigration to the U.S. and, according to polling, the most pro-American country in Asia.

This enormous network of ties, constituencies, and dispositions can’t be wound down in anything but a very long term. This is not to say that the Philippines could not make a decision to do so, but a Philippines president who attempts to move too quickly, i.e. within the timeframe of his six-years in office, will destabilize the country and likely suffer politically for all his trouble.

It is also necessary to take a step back and look at China-Philippines relations. The last six or seven years leave the impression that they are implacable adversaries, divided over claims to the same maritime space in the South China Sea. But in fact, Duterte is not the first Philippine president to actively reach out to China. President Ramos did. President Arroyo did. Even President Aquino early on avoided controversy with China in order to cultivate the relationship, deporting Taiwanese to China and boycotting the ceremony awarding Chinese Liu Xiabo the Nobel Peace Prize.

President Arroyo’s efforts, however, are the most noteworthy. She also made a state visit to China in her first year in office and later, when her abrupt pull out from the coalition of the willing in Iraq led to a fall-out with President Bush, relations between Manila and Beijing blossomed into what both sides called a “golden age of partnership.” Trade, investment and economic assistance grew, and the two sides signed a memorandum of understanding on defense cooperation. They held multiple rounds of defense talks, and China even provided the Philippine military with non-lethal equipment.

In the end, this blew up in Arroyo’s face. Massive corruption in connection with some of the business deals she and her delegations struck on her China visits were tied to a new found flexibility on Philippines claims in the South China Sea. The scandal brought her down and established the South China Sea dispute as political roadblock for any attempt by her successor to improve relations with China. As President Duterte returns home with 300-person strong business delegation, President Arroyo’s demise should serve as a lesson about the hazards of being overeager with the Chinese.

Finally, it is worth looking at the Chinese perspective on this relationship. Are they looking for a better relationship with the Philippines? Yes. Are they grateful for the prospect of Duterte putting aside their dispute over the South China Sea in pursuit of better relations? Absolutely. Is the Chinese leadership comfortable with Duterte’s casting of this relationship in the sort of zero-sum, cold war terms he did in Beijing? Probably not. The Chinese have an extraordinary amount of equity in US-China relations and are unlikely to allow the likes of Duterte to jeopardize it. And this underscores the limits on how far Duterte can take the relationship with China. Unpredictable, loud, and disrespectful, he is not the sort of character that today’s leadership in Beijing takes to well.

At the end of the day, Duterte is the freely elected president of the Philippines. What he says matters. What he does – actually giving orders to abrogate treaties and expel U.S. military – would matter more. But context also matters, and there is a lot of it in US-Philippines relations. The U.S. should refrain from taking him on just now.  Better to watch how things develop.