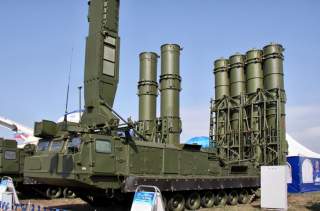 Russia has started to deliver the powerful Almaz-Antey S-300 integrated air defense system to Iran, according to a top Kremlin official. The Iranians are receiving an upgraded version of the weapon called the S-300PMU-2 Favorit.

Kozhin’s statement confirms an earlier report in which Iranian ambassador to Russia Mehdi Sanai said Tehran had received its first S-300 batteries. The S-300PMU-2 Favorit has a range of more than 120 miles and can hit targets as high as 100,000ft. The system can engage half-a-dozen or more targets simultaneously. Either version of the weapon is extremely capable and could render entire swaths of Iran nearly invulnerable to attack via conventional strike aircraft.

Only the Lockheed Martin F-22 Raptor, F-35 and Northrop Grumman B-2 Spirit stealth bomber would be able to operate inside areas protected by those weapons. But even those aircraft could be challenged if there were enough S-300 batteries operating as part of an integrated air defense network.

The exact number and location of the S-300s would make a huge difference. The problem is further compounded by the fact that the S-300 system is mobile—and can move at a moment’s notice. “If they’re all over every square inch of the country, then it doesn’t matter what you put out there—it’s going to be a challenge,” a senior Air Force official with extensive stealth experience told me earlier in the year. But exactly how many S-300s Iran is buying is unclear.

Also, the S-300 is just the beginning. As sanctions on Iran are lowered and the country has increased access to the international market, Tehran is likely to push to modernize its dilapidated military forces. The only real limiting factor will be the price of oil.

“When all restrictions and all sanctions are lifted, I think we will have a rather serious development in the sphere of military-technical cooperation, it partially now embraces items not covered by sanctions, and we hope for very large projects in the future,” Kozhin told TASS. “The interest of the Iranian side is huge. They really need serious upgrade of their entire armed forces,” Kozhin said. “Taking into account that it is a large country with large armed forces, of course, the talk will be about very large contracts, worth billions,” he added.

With Western hardware likely to be out of reach even when sanctions are lifted, Iran really only has Moscow and Beijing to turn to. But Iran seems to be gravitating more towards Russian-built hardware. Indeed, in recent months it has also looked at buying the Sukhoi Su-30 Flanker—but which version is unclear.

It is very possible that Iran might be interested in one of the advanced versions based on the Su-30SM, which would be similar to the aircraft operated by India, Malaysia, Algeria and Russia itself. However, it is also possible that Iran could opt for a variant of the more basic Su-30M2, which is also in service with the Russian air force. That variant is somewhat less expensive, which might make more sense considering Iran’s economic situation.

The Su-30M2 variant, which is built in Komsomolsk-on-Amur Russia, is missing the Su-30SM’s canards and thrust vectoring nozzles, as well as has a less comprehensive avionics suite. Either way, the addition of any Su-30 variant would greatly increase the capabilities of the Iranian air force, which is mostly equipped with an antiquated mix of U.S.-, Russian- and Chinese-built hardware.

The most advanced aircraft Iran has are a handful of American-built Grumman F-14A Tomcats and MiG-29s. The rest of its arsenal is composed of geriatric F-4 Phantom IIs, locally modified F-5 Freedom Fighters and Chinese-build F-6 and F-7 aircraft—derivatives of the MiG-19 and the MiG-21 respectively.