Russia and China Have One Big Advantage over the U.S. Navy (But Not for Long) 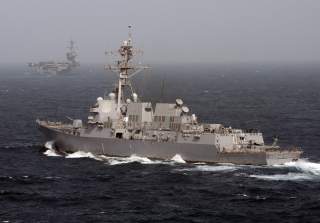 The U.S Navy is moving forward with adding an anti-ship capability back into its Tomahawk Block IV cruise missiles to defeat a new generation of enemy surface combatants at range.

In the past, the Navy had fielded a dedicated anti-ship version of the Tomahawk, but that variant of the weapon was retired during the 1990s during the post-Cold War drawdown.

As part of its efforts to boost its anti-surface warfare capabilities as it moves to counter new Russian and Chinese naval vessels, the U.S. Navy is awarding Raytheon a $119 million contract to integrate a new multi-mode seeker into the Tomahawk that would enable the cruise missile to engage enemy warships.

"The U.S. Navy and Raytheon are working closely together to further enhance this modern missile, keeping Tomahawk in the fleet for decades to come," Capt. Mark Johnson, Naval Air Systems Command’s Tomahawk program manager, said in a statement.

"No other weapon on earth can match this cruise missile's capability. Proven thousands of times in combat, Tomahawk is the nation's weapon of choice."

"Tomahawk is second to none in destroying stationary land targets, and soon the weapon will defeat moving maritime targets. Enemy vessels at sea will not elude Tomahawk."

Developing and fielding a substantive anti-ship capability is a very high priority for the Navy. The service is developing the new Tomahawk seeker under a Rapid Deployment Capability program to meet “urgent fleet requirements for defeating emerging maritime threats worldwide.”

The Navy expects delivery of the new Tomahawk anti-ship capability no later than 2022.

The weapons is one of several new anti-surface warfare missiles the Navy is working on including the Lockheed Martin AGM-158C Long Range Anti-Ship Missile (LRASM), which will fielded onboard the U.S. Air Force’s B-1B Lancer strategic bomber in 2018 and shortly thereafter on the Boeing F/A-18E/F Super Hornet in 2019 as the Offensive Anti-Surface Warfare (OASuW) Increment 1. A second competition might pit the Tomahawk against the LRASM for Offensive Anti-Surface Warfare (OASuW) Increment II.

The U.S. Navy can’t field a new anti-ship missile quickly enough. The service’s warships are at a considerable disadvantage against Russian and Chinese warships that are equipped with long-range supersonic sea-skimming weapons such as the P-800 Onyx.