Russia Could Soon Arm Its Navy with Hypersonic Missiles 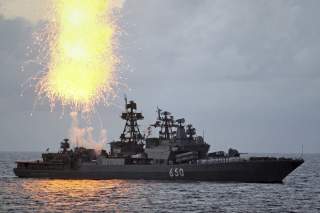 The Russian Navy might receive the Zirkon hypersonic anti-ship missile during the Kremlin’s state armament program (GPV) for 2018-2027. If the new weapon materializes, Russian Navy’s Project 20385 and 20386 corvettes and Project 23350 and 23350M frigates would be among the first to receive the new missiles according to a report from the Russian TASS news agency.

“One of the priorities is to build corvettes of the Project 20385 and 20386 classes and frigates of the Project 23350 and 23350M classes with high-precision weapons, including Caliber-NK cruise missiles and Zirkon hypersonic missiles," a Russian defense industry source told TASS.

Vasily Kashin, a senior fellow at the Center for Comprehensive European and International Studies at Moscow’s Higher School of Economics told The National Interest, said that while it is unclear where the Zirkon is in its testing, there is no reason to believe that the weapon cannot be produced in the coming years. “I do not see any reasons to doubt that Russia can start procuring them in the next several years,” Kashin said.

Michael Kofman, a research scientist specializing in Russian military affairs at the Center for Naval Analyses, said that the Zirkon is currently in testing, and funding will likely be allocated to the missile in the state armament plan.

“Tsirkon is one of the prospective hypersonic missiles currently in development and testing,” Kofman said. “The Russian navy intends to upgrade existing launch systems, such as 3S14 VLS [vertical launch system], to use it, which now fires P-800 and Kalibr-NK. Undoubtedly funding will be allocated for this project in the first five years of the upcoming state armament program.”

One of the reasons that Russia is developing the Zircon is because the Kremlin knows that it will eventually need a next-generation weapon. “Although Oniks and Kalibr are already capable anti-ship missiles, much of this tech is from late 1980s designs,” Kofman said. “Russia is now investing in the next generation, hence the strong push towards hypersonic weapons.”

Exactly how the new weapons will fit into the Russian inventory if and when they become operational is not clear. “It will depend on price and range I guess, “ Kashin said. “For example, the introduction of supersonic anti-ship missiles did not lead to the complete phasing out of subsonic ones. We still produce the X-35, so maybe there will be a mix.”

One of the reasons that the Russians will likely maintain a mix of weapons—reserving the Zircon for the most difficult targets—is because of cost. “It likely will be much more expensive than the ordinary supersonic types,” Kashin noted.

Moreover, it is difficult to gauge exactly how much progress Russia has made on the development of the Zircon. As Kofman notes, it is very easy for the Russian Ministry of Defense to make grand pronouncements, it is quite another to field a new weapon operationally. “It's hard to say how far away the Russian defense industry is from realizing this project,” Kofman said. “Testing and development announcements are cheap, and many amount to little more than self-PR.”