Russia Is Deploying Special Anti-Aircraft Missiles to the Arctic 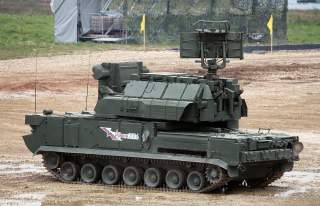 In yet another reminder how close the North Pole is to becoming a battleground, Russia is beefing up its military capabilities in the Far North, including a special Arctic antiaircraft missile system.

Russian media prominently announced that Arctic-modified weapons will be displayed at the May 9 Victory in Europe Day parade.

“Arctic military equipment will participate in the parade for the first time,” Russian ground forces commander Colonel-General Oleg Salyukov said earlier this month. “The general public will for the first time be able to see such air defense weapons as Tor-M2DT and missile, artillery system Pantsir-SA and support vehicles.”

“Also, we may present upgraded configurations of the well-known models of tanks, possibly, T-72B3M,” Salyukov said. He added that “the military equipment he mentioned was capable of maintaining Russia’s security in the rigorous Arctic climate in rugged roadless terrain far away from logistic facilities,” according to TASS.

The Tor M2-DT is the Arctic version of the Tor M2 (NATO code name SA-15 Gauntlet), a short-range, self-propelled surface-to-air missile system with a missile range of about eight miles. A collaboration between missile manufacturer Kupol and engineering firm Vityaz, the Tor M2-DT is mounted on the DT-30PM-T1 two-section tracked prime mover.

“This year, the upgrade of the S-300V4 complex and the adaption of the Tor anti-aircraft missile system for Arctic applications will be completed. Work is in full swing to develop an advanced antiaircraft artillery complex,” Russian air defense force chief Lieutenant-General Alexander Leonov announced, according to TASS.

The Russian military is portraying the polar buildup as part of an overall strategic regrouping. “The General Staff concentrates the basic efforts on increasing combat capabilities, the capabilities of the Armed Forces, deploying and reinforcing the groupings of forces in the western, south-western and Arctic strategic directions,” said Sergei Rudskoi, head of the General Staff’s Main Operations Department, according to TASS.

Given Russia’s geography, and its vast experience in fighting in frozen climates, it’s not surprising that Russia has developed special Arctic weapons. Nonetheless, Moscow is not exactly being secretive about its Arctic buildup. In fact, those who need a demonstration of the Russian military’s Polar prowess can now take a virtual tour of Russia’s new Arctic Trefoil air defense base, the second military base in the region. The facility, built on stilts, is located on Franz Josef Land, an Arctic Ocean archipelago inhabited only by the Russian military. After abandoning its military facilities there in the 1990s after the Cold War ended, Russia reopened an airfield in 2012, and is building four other bases to join the first two.

Meanwhile, it’s not just Russia that is interested in the Arctic, where melting ice means that new shipping routes could open. The United States, Canada and other Western nations are preparing for conflict in the Arctic, a region whose mineral wealth is eyed by several nations. The U.S. Navy is developing underwater drones to explore the Arctic ice pack, while Canada wants the United States, Norway and Denmark to join it in funding a military communications satellite to service the Arctic.