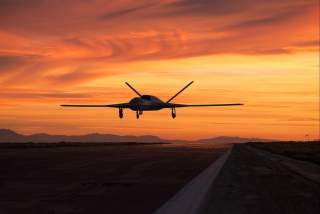 Russia has started development of a new unmanned strike aircraft in the same general class as the General Atomics Avenger. The Russian defense ministry awarded a contract to the Simonov design bureau late last year one day after Christmas on December 26.

“It should be equipped with a turbojet engine that gives the unmanned vehicle speeds at least two times greater than those of analogous propeller drones,” a Russian defense industry source told RIA Novosti according to the Russian-language Izvestia newspaper.

According to the paper, the aircraft would be capable of speeds of 1000kmph or roughly 600mph. Very few additional details are available except that the Russians compared the aircraft directly to the Avenger design.

Based on the available information, it is likely that the aircraft would be an intelligence, surveillance and reconnaissance (ISR) platform that would be used in moderately contested airspace or perhaps the maritime environment. Future developments might eventually evolve into machines capable of flying into anti-access/area-denial environments.

It will take time and money for Russia to develop an operational jet-powered unmanned strike aircraft. “They are seeking to rapidly develop new UAV [unmanned aerial vehicles] with strike capabilities and this new drone could be a test bed for that platform,” Sam Bendett, a researcher specializing in Russian military robotics at the Center for Naval Analyses told The National Interest. “This could be a test bed for the new high speed concept. After all, United States is also developing this new type of platform.”

It might be years before the new Simonov unmanned jet takes to the air—but the stiff competition to win the contract shows that Russian industry is starting to catch up to the West in some regards.

“This will take place over the next several years - the Simonov Design Bureau just got the contract, so a prototype won’t fly for the next several years,” Bendett said. “This design bureau beat out its rivals such as Yakovlev, Tupolev and Kronshtadt bureaus—the last one on this list just unveiled Orion ISR drone—so we are seeing serious competition emerging in Russia's domestic UAV manufacturing.”

The current Russian effort is mostly geared towards developing a test platform, however, it could eventually result in an operational aircraft. “Eventually, with enough funding and a though R&D effort,” Bendett said. “After all, Simonov Bureau is also working on an Altair/Altius MALE UAV concept, which is behind schedule and over budget...”

Ultimately, Bendett is certain that Russia will develop a high-speed stealthy unmanned strike aircraft—it is just a matter of time. “It’s certain that Russia will get its high-speed UAVs- the question is when,” Bendett said. “There is a lot of government attention given to such projects, so it’s expected that an eventual working prototype will be produced and flown before 2020-2025 time frame.”