Is Russia Getting Ready to Build a New Aircraft Carrier and Fighter to Match? 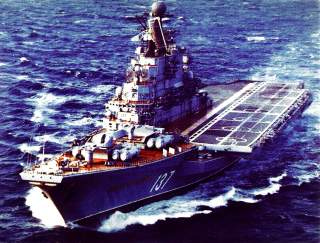 Russia is examining the possibility of building a new aircraft carrier along with a new short takeoff/vertical-landing (STOVL) fighter toward the end of its 2018-2025 state armament program.

The new vessel—which would be a “heavy aircraft carrying cruiser”—would be a revival of an old Soviet concept that was embodied in the massive Project 1143 Gyrfalcon—or Kiev-class—vessels. Like the Kiev-class of old, the new ships would carry STOVL aircraft similar in concept to the Yakovlev Yak-41 (sometime called the Yak-141) Freestyle supersonic vertical takeoff/landing (VTOL) multirole fighter that was cancelled in August 1991 shortly before the collapse of the Soviet Union itself.

Russian deputy defense minister Yuri Borisov floated the revival of the Kiev-class concept along with the idea of reviving a Yak-41 like STOVL/VTOL multirole at the MAKS-2017 airshow in Zhukovsky just outside Moscow on July 18 according local reports. Presumably, like all Russian “heavy aircraft carrying cruisers,” the new vessels would carry a full complement of air defenses, cruise missiles and other weapons.

Russia had abandoned the Kiev-class concept in the aftermath of the Cold War—preferring instead to preserve the Kuznetsov-class as the basis of its post-Soviet naval aviation capability. Indeed, by 1995, a cash-strapped Russia had retired all four Kiev-class ships, which were formidable surface warships in their own right even without the subsonic Yakovlev Yak-38 Forger VTOL strike aircraft onboard (the less than satisfactory Yak-38 was retired in 1991). The last surviving Kiev, Admiral Gorshkov—originally named Baku—was refitted and sold to India as INS Vikramaditya in 2004.

While the Russian Ministry of Defense might be floating the idea of a new aircraft carrier, the chances of the Kremlin purchasing such a vessel are remote at best. Russia simply does not need an aircraft carrier nor does the Kremlin have the resources to build and operate such vessels given its other more pressing priorities.

“This is yet another installment in a series of regular announcements that Russia will build an aircraft carrier--or heavy aviation cruiser--always slated for sometime years from now,” Center for Naval Analyses research scientist Michael Kofman told The National Interest.

“They reflect the Russian Navy's existential suffering in their desire to replace the aging and moribund Kuznetsov, even though there is no practical need or mission for such a ship. Undoubtedly these announcements will be made well into the 2020s while no ship is actually laid down.”

There is a somewhat more realistic chance that a Yak-41M or an aircraft that uses much of that aircraft’s technology might emerge—and it is possible that Russia might plan to consider building a new carrier.

“The state armaments program in Russia consists of two 5-year periods. Planning for the first period is fixed, for the second preliminary and subjects to corrections,” Vasily Kashin, a senior fellow at the Center for Comprehensive European and International Studies at Moscow’s Higher School of Economics, told The National Interest.

“So they can safely plan considering a short takeoff plane and laying down a carrier for the second period of the program.”

One reason a new VTOL jet might emerge is to parcel out work to keep certain contractors afloat in an effort to preserve the Russian industrial base. However, Russia does have a genuine potential need for some kind of fixed-wing strike capability for a future large-deck amphibious assault ship.

“The project could well be an effort to give work to a particular bureau,” Kofman said.

“Right now, these pronouncements are back-loaded into the mid-2020s to the point of being ethereal. It may reflect a genuine desire to explore the options for marrying a prospective LPD/LHD design with a VTOL aircraft at some point.”

It is not clear if the new VTOL fighter will literally be a revival of the Yak-41M design—which had aerodynamic performance comparable to the Mikoyan MiG-29 Fulcrum but was slower with a top speed of around Mach 1.4. It’s also possible that the new aircraft could be a clean sheet design.

“The intent is unclear, but it would probably use the original design and work that went into developing the Yak-41M,” Kofman said.

It is likely that even a brand new VTOL design would use some of the Yak-41M’s innovations—particularly for the aft swiveling nozzle. Indeed, even Lockheed Martin collaborated with the Yakovlev design bureau during the early 1990s when designing the X-35 demonstrator. The X-35 test aircraft ultimately evolved into today’s F-35 Joint Strike Fighter.

“During the early days of the JAST effort, Lockheed (accompanied by US government officials from the JAST program office) visited the Yakovlev Design Bureau along with several other suppliers of aviation equipment (notably also the Zvezda K-36 ejection seat) to examine the Yakovlev technologies and designs,” Lockheed X-35 engineer Kevin Renshaw in 2014 in the company Code One magazine.

“Yakovlev was looking for money to keep its VTOL program alive, not having received any orders for a production version of the Yak-141. Lockheed provided a small amount of funding in return for obtaining performance data and limited design data on the Yak-141. US government personnel were allowed to examine the aircraft. However, the 3BSN design was already in place on the X-35 before these visits.”

Ultimately, time will tell if Russia will genuinely try to revive the Kiev-class concept and built a new VTOL fighter. The fact is that while such projects might be impressive on paper, the Kremlin does really need such a vessel when scarce modernization dollars—or rubles as the case maybe—are better utilized on other more militarily useful programs.