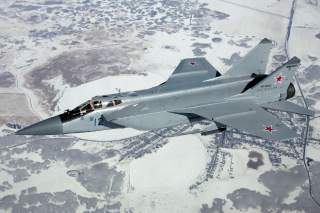 Russia’s Victory Day parade on May 9, commemorating the victory over Nazi Germany, is an annual event for showing off military hardware in grand imperial style. Which is why military observers watch the proceedings closely. The parade is both a nationalistic display and a baring of military teeth for geopolitical purposes.

The 2018 parade also comes during another period of heightened tensions as U.S. Pres. Donald Trump mulls a strike on Syria following a chemical weapons attack on Douma — carried out by what appears to be Syrian Mi-8 helicopters dropping chlorine cylinders.

The Russian military, it appears from recent rehearsal footage from the Alabino training grounds, is preparing to show its teeth indeed. Hypersonic cruise missiles and heavily-armed urban combat vehicles are among the machines spotted so far.

That’s not all. Russia should also again roll out the T-14 Armata, Russia’s newest tank which has made a prior appearance at the 2017 parade. The Kremlin might also show off its Su-47 stealth fighter in a Moscow overflight, which would be a Victory Day first.

One of the more interesting armored vehicles produced not just in Russia but the world is the BMPT or “Terminator.” The nickname is hardly subtle. Russia originally produced the vehicle more than 10 years ago on the basis of the T-72 tank chassis, but Kazakhstan was the only country to adopt it into service.

The new version is built on the basis of the T-90 chassis and is known — slightly confusingly — as the BMPT-72 “Terminator 2.” What the vehicle specifically does is urban warfare, and it is optimized specifically for it. The BMPT-72 is both heavily armored, like a tank, and is bristling with weapons of the kind that lighter armored vehicles often don’t have.

Its guns can traverse high, allowing it to strike into the upper floors of buildings — where Chechen rebels rained down rockets on thin-skinned Russian vehicles during two wars — and hillsides, which owes to the Soviet experience in Afghanistan.

Notice in the above photo how the BMPT-72’s turret has twin 30-millimeter 2A42 autocannons. On each side of the main gun are twin Ataka-T anti-tank missile launchers. And unlike the original BMPT, the Russian military is putting the BMPT-72 in service.

Russia rolled out Vityaz’s in this cold-weather scheme in 2017, but their appearance again in 2018 rehearsals is worth noting given the Kremlin’s interest in weapons and hardware for Arctic warfare.

The Vityaz is a tracked, all-terrain transport developed in the 1980s and designed to maneuver in difficult terrain such as snow, mud and swamps — of which there is plenty in Russia.

What’s worth paying attention to are the bulky objects in the rear compartments, which gives an idea of how Russia intends to use these enormous transports. Those are Tor-M2DT anti-aircraft missile launchers

In March 2018, a Russian MiG-31 Foxhound fighter jet fired off a Kinzhal, or “Dagger,” hypersonic missile — an experimental weapon designed to travel farther than faster than conventional cruise missiles.

A deployable, battle-ready Khinzal is probably still years away. Hypersonic weapons are extremely complicated to reliably build, and what we know of the Khinzal is that it’s not a proper scramjet missile but a rare example of an air-launched ballistic missile — or ALBM. Unlike an air-breathing weapon, the Khinzal relies on the MiG-31’s high speed and high maximum operating altitude to travel at extreme range.

And Russia plans to show it off, according to imagery from the Victory Day rehearsal. That’s a big deal.

One of Russia’s MiG-31Bs configured to test the Khinzal appeared to fly over the mock parade — with a missile that looked like a Khinzal slung underneath. However, there’s a chance the missile might not be authentic, as mockups are not unheard of in such parades. It’s still a good idea to assume that it’s real.