Russia Has a Tank with the Strangest of Features: It Can Swim 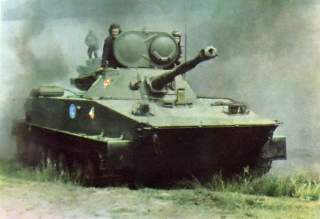 The vehicle entered production in 1951 as the PT-76, named after the rifled 76-millimeter D-56 gun in the turret, which had the same caliber and barrel length as the F34 gun on World War II T-34 tanks. However, the D-56 could use more powerful ammunition. While most of the 40 onboard shells were high explosives or armor piercing shells that could penetrate 100 to 127 millimeters of armor, later PT-76s received special low-velocity BK-350M shaped-charge HEAT rounds that could penetrate 200 to 280 millimeters. These could threaten the heavier tanks of the era, though only at short range.

The PT-76 seems like a minor oddity of the Cold War — a Soviet amphibious light tank with thin armor and an unimpressive gun. Certainly it seemed bound for rough treatment on modern battlefields full of heavy weapons and heavier tanks.

But the floating PT-76 chalked up a remarkable record, carrying knife-wielding Himalayan soldiers into battle, sinking gunboats on the Ganges Delta, dueling powerful U.S. Patton tanks in Vietnam, and launching amphibious surprise attacks on both sides of the same Middle Eastern war.

The first article in this two-part series will look at the origin and characteristics of the PT-76, the nasty shock it gave U.S. forces in Vietnam, and the historic countermeasure used against it.

Just prior to World War II, the Soviet Union developed a series of amphibious light tanks, the T-37, T-38 and T-40. However, these lightly armored two-man vehicles, which were all armed with a single machine gun, were poorly matched against German Panzers that invaded in 1941. Within the first six months of the invasion, most were lost and replaced by heavier vehicles.

However, the Soviet military returned to the concept after World War II, and in 1949, approved for production the Object 740 prototype designed by Nikolay Sashmurin at the Kirov factory in Leningrad.

Shashmurin’s vehicle employed two innovative side-mounted hydro jets for propulsion in water. A crew of three needed only to lower a trim vane over the hull and turn on the bilge pumps, and the tank could swim at six miles per hour on river or seawater, using panels to block the hydrojets on one side or the other for steering. It could swim for hours if necessary and even fire its main gun while afloat.

The 14.6 ton vehicles also had good all-terrain mobility on land due to the Christie suspension and hydraulic shock absorbers, though the PT-76 was hardly nimble, with a maximum speed of 27 miles per hour.

The tank’s rolled steel hull was unusually large and thinly armored to enable flotation. It did not exceed 25 millimeters of armor on the turret, and half or less than that on the sloped hull. This was adequate to protect against rifle bullets — but not .50-caliber machine gun rounds or shrapnel from heavy artillery.

The vehicle entered production in 1951 as the PT-76, named after the rifled 76-millimeter D-56 gun in the turret, which had the same caliber and barrel length as the F34 gun on World War II T-34 tanks. However, the D-56 could use more powerful ammunition.

Sources variously claim the Soviet Union built between 4,000 and 12,000 PT-76s through 1968. Its chassis would serve in many other armored fighting vehicles, including ASU-85 airborne assault gun, the ZSU-23–4 self-propelled anti-aircraft system, and the SA-6 SAM system.

However, the original PT-76 had a number of flaws. The un-stabilized main gun was highly inaccurate on the move, the crew had no protection from nuclear, biological or chemical weapons, and only the driver had any night vision equipment. A PT-76B variant introduced in 1959 addressed all but the last issue. It featured a stabilized D-56TM gun, a redesigned hull, new auxiliary fuel tanks and an uprated V-6M engine.

The Soviet PT-76s served in naval infantry units and regimental and divisional reconnaissance units. Between one and two thousand were also exported to more than 25 countries. China even produced 1,500 of its own version, the Type 63 tank. This was not an exact clone, however, as it used a locally developed propulsion system and a larger 85 millimeter gun.

For the first half of the Vietnam War, North Vietnam built up its modest tank fleet without committing it to battle. However, it finally committed its “ironclad vehicles” to the fight during the 1968 Tet Offensive, when North Vietnamese Army troops supported Viet Cong guerrillas in an all-out assault on the major cities and military bases throughout South Vietnam.

Hanoi supplied the Viet Cong via the Ho Chi Minh trail, which passed through Laotian territory. To monitor activity on the trail, the Laotian government dispatched the 700 men of the BV-33 Elephant Battalion to maintain an outpost in the town of Ban Houei Sane. The outpost also protected more than 2,000 refugees.

On Jan. 23, 1968, a week before the Tet Offensive began, the NVA’s 24th Regiment assaulted the camp at night, supported by a company of PT-76s from the 198th Armored Battalion. These had made the 800 mile journey down the Ho Chi Minh trail to join the battle. It would be the NVA’s first tank action.

It didn’t go entirely smoothly. The PT-76s bogged down several times while crossing swamps, causing the infantry — who were not used to fighting alongside friendly tanks — to engage the Elephant Battalion first. But once the PT-76s entered the fray the Laotian troops fell back in disorder.

However, the survivors’ misfortunes had only begun. Two weeks later, approaching midnight on Feb. 7, a battalion of NVA troops spearheaded by 11 to 13 PT-76s of the 198th assaulted Lang Vei. Five hundred civilian militia and Montagnard fighters defended the camp’s lengthy perimeter, backed up by 350 surviving troops of the Elephant Battalion and 24 U.S. Army Green Berets led by Capt. Frank Willoughby.

Despite intelligence reports warning of the presence of NVA tanks in the area, U.S. troops were shocked by the attack. Nonetheless, One of the camp’s two M40 106-millimeter recoilless rifles managed to knock out three of the thin-skinned vehicles, one of which was abandoned by a female crew. However, this did not deter the remaining North Vietnamese tankers as they crushed the fences, anti-personnel mines and barbed wire ringing the camp, clearing a path for infantry to follow.

The tanks’ 76-millimeter guns took out the recoilless rifle, and began blasting apart one fortified bunker after another.

The U.S. commandos began firing off their disposable M72 66-millimeter anti-tank rockets at short range. The weapons should have easily penetrated the light tanks, but instead repeatedly misfired, missed or failed to have any effect when they did hit. One team reportedly hit the same tank with nine rockets to no result.

Another tank hunting group finally managed to set a PT-76 on fire with a hit to the rear armor — the fourth and last one destroyed in the battle.

By 2:30 in the morning, the light tanks were roaming about the center of the camp, blasting away with their cannons and machine guns and besieging the American officers trapped in the command bunker.

Neither artillery and air strikes, nor a counterattack by Laotian troops led by two American Special Forces officers, could succeed in driving away the attackers. The nearby Marine base at Khe Sanh was supposed to support the camp in an emergency, but refused to dispatch reinforcements due to its own ongoing siege.

The surviving South Vietnamese, American and Laotian troops made their escape the following afternoon after the rest of the camp had fallen, leaving behind more than 300 dead.

The NVA had effectively used its PT-76s to overwhelm targets that lacked adequate anti-tank weapons. However, its tankers eventually encountered a intimidating opposition in the form of American M48 Patton tanks which weighed three times as much and boasted 90-millimeter guns and 175 millimeters of turret armor.

The first clash between the two vehicles was decidedly unconventional. Three months after the fall of Lang Vei, an observation plane spotted a PT-76 crew washing their vehicle in the Ben Hai River. The plane radioed the tank’s coordinates to an M48 of the U.S. Marine 3rd Armored Battalion at Con Thien, which raised its gun barrel high up into the air to attack with indirect fire.

Patton tanks frequently served as ad-hoc artillery in Vietnam, but it was rare in any conflict for a tank to target another in this manner. The third high explosive shell landed squarely on the tank, causing the crew to abandon the vehicle, which was later hit by an F-4 Phantom air strike.