Russia Just Fired a Hypersonic Missile from a MiG-31 Fighter. Should America be Worried? 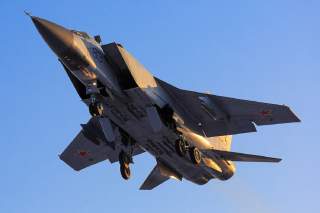 The Russian Ministry of Defense has shown off a video of a training launch of its new Dagger (Kinzhal in Russian) hypersonic missile from a Mikoyan MiG-31 Foxhound interceptor.

Portions of the video were intentionally blurred to obscure certain aspects of the weapon, but the Kinzhal appears to be an aero-ballistic missile rather than a scramjet-powered air-breathing missile. However, that should come as no surprise to serious analysts because no nation on Earth has mastered the material sciences to build a true scramjet-powered missile yet. That technology is still years away.

“Crew of MiG-31 fighter of the Russian Aerospace Forces conducted combat training launch of a hypersonic missile of the Kinzhal high-precision aviation missile system in the assigned area,” the Russian Ministry of Defense said on its Facebook page. “The fighter took off from a Southern military district airfield in course of test combat alert. The launch was conducted normally. The missile hit the target at a training ground. Hypersonic missile confirmed its technical operational performance and timing data of the Kinzhal missile system.”

As the Russian Defense Ministry explains, the Kinzhal missile is designed to strike both land and maritime targets.

“The Kinzhal system is designed to eliminate ground and sea targets,” the Russian Defense Ministry said. “Due to high flight characteristics of MiG-31 aircraft and high-maneuverable radar-stealth hypersonic missile, the Kinzhal has no analogues in the world.”

The MiG-31 is an ideal launch platform for the Kinzhal missile because of its range, massive payload, altitude and sheer speed. The aircraft has a service ceiling of roughly 67,500ft and is temperature limited to a maximum speed of Mach 2.83. However, the massive jet can maintain very high supersonic speeds for extended periods—its combat radius is 390 nautical miles at Mach 2.35—with a full air-to-air payload of R-37 missiles. Thus, exchanging its R-37 missiles for a Kinzhal missile, the MiG-31 can quickly boost the new weapon into launch position and impart significant launch energy to the aero-ballistic missile.

It is not clear how stealthy the Kinzhal is, but that the weapon would be highly maneuverable should not come as a surprise. The Iskander ballistic missile is already capable of maneuvering in flight and follows an erratic trajectory that would make it exceedingly difficult to intercept. Nor does any other country operate an air-launched ballistic missile, so Moscow is correct in that sense that the Kinzhal does not have an equivalent outside of Russia. However, the weapon is not a “hypersonic weapon” in the sense that it is an air-breathing cruise missile based on scramjet technology—though ballistic missiles inherently fly at hypersonic speeding during their flight time.

U.S. Defense Secretary Jim Mattis noted that the introduction of weapons like the Kinzhal do not fundamentally change the military balance between Russia and the United States. “I went through and looked at the clips of what he [Vladimir Putin] showed on the videos and all, I get paid to make strategic assessments, and I would just tell you that I saw no change to the Russian military capability,” Mattis told reporters on March 10. “And each of these systems that he's talking about that are still years away, I do not see them changing the military balance.  They do no impact any need on our side for a change in our deterrent posture, which would be certainly an indication I registered this assessment with something that was changing.”

“What I'm saying is they have the capability to do right now what he was touting,” Mattis said. “So it doesn't change anything, other than how much money do they want to spend on something that does not change at all the strategic balance.”