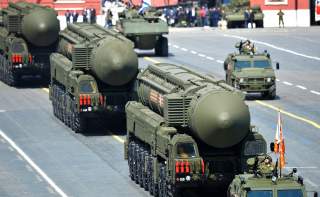 While all eyes are focused on North Korea, Russia recently conducted a massive drill of its road mobile intercontinental ballistic missile force. The drills involved all of the major Russian mobile ICBMs including the Topol, Topol-M and the Yars.

“Today, missile regiments of the Topol, Topol-M and Yars missile systems have carried out a night march. The regiments are located in five regions from the Tver region to Altai Krai,” the Russian Defense Ministry said in a statement.

“More than 600 piece of hardware including launchers, were operated to ensure combat patrol en-route.”

The drill appears to be a full scope exercise complete with adversary forces attempting to attack the launch vehicles and contaminated terrain.

“It is planned to train passing through a mock contaminated terrain. At the end of the exercise, the troops are to drill simulated launching of missiles.”

The Russians conduct massive nuclear wargames such as this one to test the readiness of their strategic deterrent.

“Looks like a routine drill of the road-mobile force,” Pavel Podvig, director of the Russian Nuclear Forces Project, told The National Interest.

The exercise is very large, however, analysts noted.

“It certainly looks like wholesale or close to that,” former Soviet nuclear negotiator Nikolai Sokov, now a senior fellow at the James Martin Center for Nonproliferation Studies, Middlebury Institute of International Studies at Monterey told The National Interest.

“There used to be a limit on exercises of mobile ICBMs in START I—no more than 50 percent—but such limit no longer exists in New START, if I remember correctly. Seems to me this could be the largest exercise of road mobiles, but it would really require data on all bases individually, not the general language in the announcement. 600 vehicles seems, though, too low for the wholesale thing.”

The Kremlin’s road-mobile ballistic missiles are arguably one of the country's most survivable legs of its strategic nuclear forces—able to disappear into Russia's vast landmass. Unlike the United States, where its submarine-based deterrent reigns supreme, Russia’s sub-based deterrent is somewhat hampered by its lack of warm water ports and constrains having operate inside heavily defended bastions.

The Kremlin considers its strategic nuclear deterrent as the paramount guarantor of its sovereignty. As such Russia places a huge emphasis on its strategic nuclear forces. This particular exercise comes on the heels of Russia’s Zapad-17 exercises in Belarus, but it not out of the ordinary.