Russia Just Revealed Its Plans for a New Aircraft Carrier 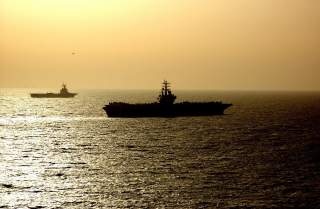 The new Krylov proposal is a much more modest—and much less costly—proposal than the massive 100,000-ton Project 23000E Storm behemoth that the company has been pitching in recent years.

The LMA carrier would only displace about 30,000 to 40,000 tons—slightly smaller than the French Charles de Gaulle—and would carry between 40 and 50 aircraft. The vessel would be able to carry the Sukhoi Su-33, a new carrier variant of the Su-35 and the MiG-29KR. A potential air wing could include airborne early warning aircraft and Ka-27 helicopters. The carriers would be built at Sevmash or potentially in Kerch—located in the disputed territory of Crimea.

The Russians have announced that they would start building a new carrier in 2024—but analysts are skeptical that Moscow will buy such a vessel. Russia has no need for aircraft carriers given its naval strategy. Indeed, the entire concept seems to be what the Russians call samopiar or self-PR.

“From what I understand, this center mainly makes model ships, and that none of the projects they've advanced are being seriously considered for production,” Michael Kofman, a research scientist specializing in Russian military affairs at the Center for Naval Analyses, told The National Interest.

“You can look at Lavina or Priboy.  Basically, they continue to pitch projects but there is no indication that the Russian Navy is seriously considering any of their ideas for funding under GPV 2018-2025.”

Vasily Kashin, a senior fellow at the Center for Comprehensive European and International Studies at Moscow’s Higher School of Economics told The National Interest that there is definitely an element of samopiar involved, but the if Russia’s economy improves in the coming years, there is a chance that the Kremlin will purchase such an aircraft carrier.

“If the economic situation improves by early 2020s that one may be real,” Kashin said.

“And 1-2 carriers will be needed anyway.”

A smaller carrier would make sense for Russia’s needs.

“If it is smaller than Kuznetsov and has a more efficient and reliable power plant, building it may actually be a way to save money,” Kashin said.

Kofman, however, is skeptical. In his view, the only flattop the Russian Defense Ministry might genuinely consider building is a large-deck amphibious assault ship in the 14,000-ton range.

“My impression is that the only ship class being seriously considered by the Russian Navy is a LPD in 2020s,” Kofman said.

“Perhaps something along the lines of Dutch variants such as the Rotterdam or the Johan De Witt-class.”

Time will tell if this latest Krylov model eventually turns into a real ship.