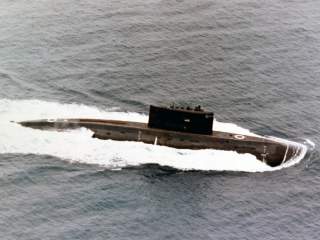 Russia launched a barrage of Kalibr land attack cruise missiles at Daesh targets in Syria from a submarine sailing in the Mediterranean Sea earlier. This is the first confirmed Russian submarine-based cruise missile strike during the conflict in Syria, however there has been some suggestion that Moscow may have launched a similar attack in November.

While Russian nuclear submarines are well known for the ability to carry a massive arsenal of anti-ship and land attack cruise missiles, today’s attack was launched from the Project 636 Improved Kilo-class vessel Rostov-on-Don, which is a diesel-electric boat. Like most advanced diesel-electric boats, the Russian Kilo-class is outfitted with air independent propulsion (AIP), which means it can remain submerged for extended periods. The Improved Kilo and the new Russian Lada-class are amongst the quietest submarines in the world—and are much quieter than their nuclear-powered equivalents.

The Kilo-class has always had the ability to carry cruise missiles. The vessels were known to be equipped with the Novator 3M-54E1 anti-ship missile—which is a weapon from the same family as the Kalibr. But as with the earlier Russian Caspian Sea-based strike, it might come as surprise to some that Moscow has equipped even smaller and less capable boats like Rostov-on-Don with an extremely potent punch.

Meanwhile, Russia seems intent on increasing the scope of its campaign in Syria. The Russian ambassador to Cyprus, Stanislav Osadchiy, told reporters that Moscow wants to use the Mediterranean island to stage military operations against Daesh. That’s despite earlier assurances from Russian foreign minister Sergei Lavrov that Russia was not asking the island nation for the use of military bases. “I think we will find a way to get these facilities,” Osadchiy told the Cyprus Mail. Russia wants “the same facilities France and Germany already have. We hope to sign (a deal) soon.”

Cypriot foreign minister Ioannis Kasoulides told the Cyprus Mail that two governments had discussed the use of bases on Cyprus for emergency humanitarian purposes. “A dialogue is ongoing between the two governments regarding facilities for humanitarian and emergency purposes,” Kasoulides said.“It is an agreement on the evacuation of Russian nationals from the Middle East, and other similar emergency situations, as provided for by international law. The same applies to the case of France.”