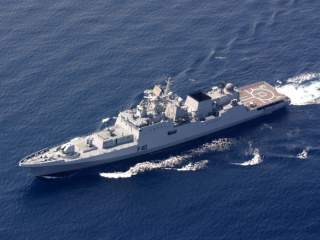 Russia is hoping to sell three of its six planned Project 11356-class frigates to India. Moscow is hoping to rid itself of those ships because of their Ukrainian-built engines.

The remaining three vessels—which are still under construction—are likely going to be sold to India since New Delhi still has functional relations with Ukraine. A final decision on selling the ships, however, has yet to be made by Moscow.

“So far, we are fulfilling the works under state defense order and building these ships,” United Shipbuilding Corporation’s vice president for military shipbuilding, Igor Ponomaryov, told the Moscow-based TASS news agency. “At the same time, we’re holding talks on the possibility of selling these frigates to the Indian side.”

The Russians had earlier suggested that the remainder of the frigates would have been completed with indigenously sourced engines. That plan does not seem to have panned out. Nonetheless, India is a logical customer for the Project 11356 vessels. New Delhi already operates a half-dozen Talwar-class frigates, which are an older variant of the same design. It wouldn’t take too much work to modify the ships to fit India’s requirements.

The roughly 4,000-ton Project 11356 frigates are relatively small, but formidable vessels. Each ship is armed with eight missile tubes capable of firing either long-range Kalibr cruise missiles or 3M55 Oniks supersonic anti-ship missiles. Anti-surface armament is rounded out by the 100mm naval gun.

For anti-submarine work, the frigates are fitted with a pair of double 533mm torpedo tubes and RBU-6000 anti-submarine rocket launcher. It also carries an either Kamov Ka-27PL or Ka-31 helicopter to assist in the sub-hunting role.