Russia Might Have Just Tested the Ultimate Weapon: Satellite-Killer Missiles 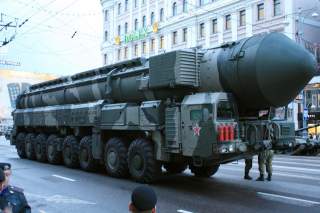 Russia has reportedly conducted an anti-satellite test in the weeks before a new U.S. president is sworn in.

There was no official U.S. confirmation of the Russian test, prompting some observers to question the nature of the exercise. "It is unclear whether or not it was an ASAT test," according to Theresa Hitchens, senior research scholar at the Center for International & Security Studies at the University of Maryland.

While the exact parameters of the reported test remain unclear, Hitchens and others said it also could be part of the Russian military's missile defense system. "Of course, any ballistic missile used for missile defense could also be used as an ASAT," she added. "Perhaps the answer lies in the eyes of the beholder."

Jonathan McDowell, a satellite tracker and astrophysicist with the Harvard-Smithsonian Center for Astrophysics, agreed that the Russian test was likely a suborbital launch of a missile defense component. "I believe this launch was probably just a test of the rocket for the Nudol system, not an actual interception test. Whether it is really an ASAT or just [missile defense] system is anyone's guess," McDowell added.

The test was reportedly the latest in a series of checkout flights of the Russian PL-19 Nudol missile, a component of Moscow's antimissile system.

China, Russia and the U.S. have all previously conducted ASAT tests. Given the heavy military dependence on satellites for navigation, communications and intelligence, the Air Force has been preparing a "counterspace" strategy aimed primarily at China.

George Leopold is a contributing editor for Defense Systems and author of Calculated Risk: The Supersonic Life and Times of Gus Grissom."Connect with him on Twitter at @gleopold1.