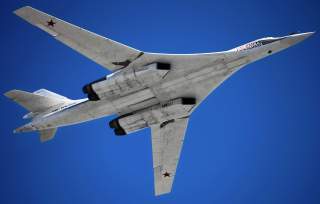 Rich businessmen around the world want Russia to turn its Tupolev-160 strategic bomber into a private jet.

And Russia is saying nyet.

A senior Tupolev executive claims that the aircraft manufacturer has turned down many requests to civilianize its Tu-160 (NATO codename Blackjack), a long-range strategic bomber that resembles America's B-1 Lancer, and its TU-22M3 Backfire bomber. "Big business tycoons in different countries (an Arab sheikh, a millionaire in Australia and a wealthy Greek among them) keep asking us to make a personal supersonic plane on the basis of the missile-carrying Tupolev-160 or long-range bomber Tupolev-2M3," Tupolev Deputy CEO for Design and R&D, Valery Solozobov, told Russia's TASS news agency. "We get such messages regularly, some of them through the Rosoboronexport agency."

All of those requests have been turned down.

However, Solozobov points out that passenger jets don't need sophisticated features of a bomber, such as variable-shape wings. "The retractable canards might be used, but they are not always necessary."

"Turning Tupolev-160 into a passenger plane would be a very costly affair," he added. "It is far less expensive to build a plane anew and without the know-hows used in creating the Tupolev-160."

Not surprisingly, Solozobov also noted that the Russian bombers, designed during the Cold War, contain classified technology. "Most of the Tupolev-160 know-hows are secret, so building even a passenger configuration of this plane for private clients would be wrong," Solozobov said.

A supersonic bomber and a passenger jet are very different birds. One is optimized to deliver nuclear weapons while not being shot of the sky, with cost tending to be a secondary consideration: the other is designed to deliver large number of passengers safely and cheaply, and with a minimum of fuel and maintenance. As a business jet to ferry a business tycoon, his small entourage and plenty of good food and booze, perhaps a bomber like the Tu-160 could serve as a taxi and party plane. But it would not be cheap, which suggests that your bomber-to-business jet is less business and more pleasure.

Historically, it is not unprecedented for bombers to find a second life as civilian transports. After the First World War, Britain's Vickers Vimy bomber flew airmail. Nazi Germany's Focke-Wulf 200, which terrorized Allied merchant ships sailing outside fighter cover in the Atlantic, started life as a long-range airliner. The Avro Lancaster heavy bomber, the firebombing scourge of German cities, morphed into the Lancastrian airliner that brought food to starving Berlin during the 1948 airlift. And, of course, there is the legendary C-47 transport of World War II, which is still flying today. The reverse is also true: the U.S. Navy's P-8A Poseidon maritime patrol aircraft is a converted Boeing 737 airliner.

However, the most bizarre example was a proposed Soviet plan in the 1960s to convert the MiG-25 Foxbat, a Mach 3 interceptor, into a very, very fast business jet for the Kremlin elite. That was matched by a 1960 proposal to convert America's Mach 2 B-58 Hustler bomber into a supersonic airliner. Instead of carrying bombs and fuel in its under-fuselage pod, the Hustler would have carried passengers.

Fortunately for taxpayers and passengers, neither project saw the light of day.