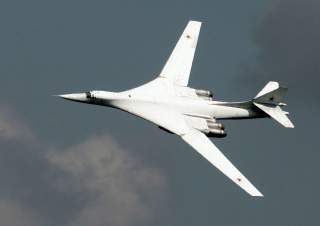 “We are going to purchase the entire fleet of our strategic Tu-160 bombers in their new version and carry out heavy upgrade of operational aircraft where only the fuselage will remain while all the onboard radio-electronic equipment and engines will be replaced,” Deputy Defense Minister Yuri Borisov said on March 28, according to Russian media outlets. “That is why, we will get the renewed fleet of strategic aircraft somewhere by 2030.” Borisov also said the new Tu-160 will have greater stealth due to “due to special coatings.”

Moscow first announced it was relaunching production on a new version of the Tu-160 back in 2015. At the time, it was seen as a stopgap measure before a new generation of bombers were produced. President Vladimir Putin unveiled the first prototype of the modernized version of the Tu-160 bomber during a campaign stop at the Tupolev company in Kazan in January. “[It] only looks like the Tu-160 I flew,” Putin said at the campaign stop. “But it’s a completely different machine.”

Earlier, a former Russian pilot had detailed some of the changes that made the modernized Tu-160 bomber, which is being called the Tu-160MS2, a different plane. “Even though on the outside it looks much like its predecessor, Tu-160MS2 will be a whole new aircraft with a new fire control and navigation gear, advance system of electronic jamming, a new cockpit and more fuel-saving engines,” Vladimir Popov, the former pilot said, Sputnik reported. The same report said that the new engine would extend the plane’s range by one thousand kilometers, which will reportedly bring it up to twelve thousand kilometers without refueling. The Tu-160MS2 conducted its first flight test earlier this year.

The original Tu-160 was first flight tested in 1982, but didn’t enter into service until 1987, around the end of the Cold War. It was said to be the counterpart of America’s B-1 bomber, although unlike that plane, the Tu-160 continues to have a nuclear role. Russia is believed to have around fifteen or sixteen of the original planes, after having built twenty-five or so of them. Those are likely to be updated to meet the new Tu-160MS2 standard.

The Tu-160 is a massive plane, roughly 30 percent larger than the B-1 bomber, and it can travel at speeds greater than Mach 2.0. The plane’s size reduces its stealth, but that works just fine for the Russian Air Force, as Moscow does not intend to have it penetrate enemy airspace like the B-2 bomber. Instead, the Tu-160, nicknamed Blackjack, would simply launch stand-off cruise missiles from Russian or neutral airspace. Indeed, the National Interest’s Dave Majumdar has called the Tu-160 a “cruise missile carrier.” Despite Borisov’s claim that the modernized plane will have a new special coating, it will in reality probably operate the same way as the older version.

Still, the decision to produce modernized versions of a Cold War bomber is indicative of Russia’s struggles to produce a new-generation strategic bomber. Russian leaders have been touting the development of a new bomber, tentatively called PAK DA, for the last fifteen or twenty years. And Putin continues to insist that that program is still making progress. Still, progress has been slow in coming. In early 2017, Russian media outlets reported that a full-size prototype had been completed. But last December, a Russian senator said the full-size prototype was still not completed.

There are a number of obstacles that are likely to prevent Russia from completing the PAK DA bomber in a timely fashion. Some of them are obvious, such as the growing fiscal problems of the Russian Federation, which has cut into its general military modernization planes. But this is only the start of the issues. As Dave Majumdar has highlighted, Russia also likely lacks enough high-skilled workers to build the aircraft. “One of the problematic issues for the company is the shortage of highly skilled specialists such as mechanics, engineers, designers, workers, etc.,” Nikolai Savitskikh, the director general of the Kazan Aviation Plant (KAZ), said earlier this year. KAZ is also slated to build the PAK-DA bomber on top of the new Tu-160s. It is also unclear how much of a priority a new-generation bomber really is for Moscow, given its strategic needs.

In the end, the PAK-DA isn’t likely to see the light of day for a while, if it ever does. “PAK-DA still exist, but it is a very long term project,” Vasily Kashin, a senior fellow at the Center for Comprehensive European and International Studies at Moscow's Higher School of Economics, recently told Majumdar. He added, “Even flight testing is expected to start at the second half of the next decade. . . . And strategic bomber projects are always very difficult and unpredictable. I think it will be around by the time when all of the Soviet built planes must be replaced.”