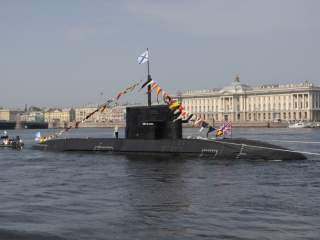 Russia is scrapping its Project 677 Lada-class diesel-electric submarine program in favor of the new Kalina-class.

The Russian navy will complete the two Lada-class vessel that are currently under construction before moving on to the much more advanced fifth-generation Kalina-class boats. The first Project 677 submarine, Sankt Peterburg (pictured), is currently in service with the Russian Baltic Fleet.

“The Navy has decided to complete the construction of two Lada-class boats and stop the work on the project. All three boats of this project will join the Baltic Fleet. Funding will be directed to the Kalina project,” a Russian naval official told RIA Novosti/Sputnik this week. Construction of the new submarines is expected to start after 2020.

The cancelation of the Lada-class is not particularly surprising. Sankt Peterburg has had problems with its propulsion system and does not have an Air Independent Propulsion (AIP). The two Lada-class vessels currently under construction will probably solve some of those issues discovered on Sankt Peterburg, but apparently Moscow is not satisfied with the design.

There is very little that is known about the Kalina-class other than the fact that is a fifth-generation successor to the Project 636 Varshavyanka (Improved Kilo-class) and Project 677-class boats. The Russians are expected to fit the new vessels with an advanced AIP system, according to the U.S. Navy’s Office of Naval Intelligence.

Indeed, Russia’s navy hopes to complete development of a next-generation AIP by 2017. The new system will likely be tested onboard one of the Lada-class submarines that is being built or on one that is currently in service. With the new AIP system installed, the Kalina would be able to stay underwater for about twenty-five days or so.

“Russia is currently designing a fifth-generation conventional submarine, dubbed Project Kalina, which will be fitted with an air-independent propulsion (AIP) system,” Russian Navy commander Adm. Viktor Chirkov told RIA Novosti in 2014. “Our industry promises to develop this AIP system by 2017 and build the first boat fitted with such a system by 2018.”

It has also been reported that Russia might export the future Kalina-class submarines to China. The addition of the Kalina would improve Beijing’s undersea capabilities in waters close to China, but it wouldn’t afford the People’s Liberation Army Navy the global reach of a nuclear-powered vessel. Chinese nuclear submarine technology remains decades behind Russian and American vessels.