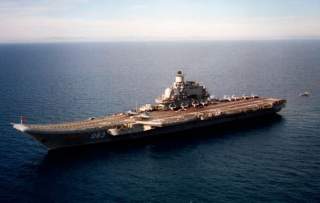 Russia has revealed key details of a new supercarrier it plans to build.

In a new interview with IHS Jane’s, Valery Polyakov, the deputy director of Russia's government-owned Krylov State Research Center, the company designing the new carrier, outlined some new details about the ship, which is being billed as Project 23000E or Shtorm (Storm).

The carrier will be able to carry between 80-90 combat aircraft of various kinds. Jane’s revealed that “the model features a split air wing comprising navalised T-50 PAKFAs and MiG-29Ks, as well as jet-powered naval early warning aircraft, and Ka-27 naval helicopters.”

A mockup of the carrier built by KRSC will be unveiled at the International Maritime Defense Show 2015, Polyakov said. That show will be held July 1-5 in St. Petersburg.

In addition, the carrier mockup KRSC built has four launching positions. Two of the launching positions are of the ski-ramp variant, while the other two are electromagnetic aircraft launch systems (EMALS), which the U.S. Navy itself just tested last week. As the U.S. Navy explained in a press release announcing the test, EMALS offer a number of advantages over the traditional steam-based launch systems.

One of the major shortcomings of the vessel, as currently designed, is that it will be powered by a conventional power plant, rather than a nuclear one. This could be later changed, per the customer’s wishes, Polyakov said.

Reports that Russia was planning a new aircraft carrier first emerged in local media back in February. Those reports were confirmed by Russia’s naval chief the following month. "The Navy will have an aircraft carrier. The research companies are working on it, and strictly in compliance with the requirements from the Chief Commander," Viktor Chirkov, Russia’s top naval officer, said at the time.

Russia currently operates one carrier, the Admiral Kuznetsov, which was launched by the Soviet Union back in 1985. This should make it easier for Russia to construct a new aircraft carrier than a country like China, which has less experience with naval aviation than Moscow.

That being said, the proposed new carrier will be exponentially more complicated to build than Russian and Soviet carriers of the past. As such, it is extremely likely that the proposed Shtorm carrier will never come to fruition, especially given Russia’s mounting fiscal difficulties. As Jim Holmes wisely counseled, “Let’s not make too much of this.”